New Fermi-based Tesla products deliver the performance of a CPU-based cluster at one-tenth the cost and one-twentieth the power. 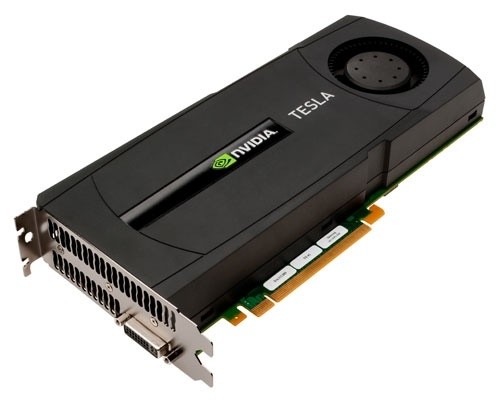 Designed from the ground-up for parallel computing, the NVIDIA® Tesla™ 20-series GPUs slash the cost of computing by delivering the same performance of a traditional CPU-based cluster at one-tenth the cost and one-twentieth the power.

"NVIDIA has deployed a highly attractive architecture in Fermi, with a feature set that opens the technology up to the entire computing industry," said Jack Dongarra, director of the Innovative Computing Laboratory at the University of Tennessee and co-author of LINPACK and LAPACK.

The Tesla 20-series GPUs combine parallel computing features that have never been offered on a single device before. These include:

At their core, Tesla GPUs are based on the massively parallel CUDA computing architecture that offers developers a parallel computing model that is easier to understand and program than any of the alternatives developed over the last 50 years.

"There can be no doubt that the future of computing is parallel processing, and it is vital that computer science students get a solid grounding in how to program new parallel architectures," said Dr. Wen-mei Hwu, Professor in Electrical and Computer Engineering of the University of Illinois at Urbana-Champaign. "GPUs and the CUDA programming model enable students to quickly understand parallel programming concepts and immediately get transformative speed increases."

• Tesla S2050 & S2070 GPU Computing Systems
- Four Tesla GPUs in a 1U system product for cluster and datacenter deployments
- Up to 12 GB and 24 GB (respectively) total system memory on board GDDR5 memoryii
- Double precision performance in the range of 2.1 TFlops - 2.5 TFlops

NVIDIA awakened the world to the power of computer graphics when it invented the graphics processing unit (GPU) in 1999. Since then, it has consistently set new standards in visual computing with breathtaking, interactive graphics available on devices ranging from portable media players to notebooks to workstations. NVIDIA's expertise in programmable GPUs has led to breakthroughs in parallel processing which make supercomputing inexpensive and widely accessible. Fortune magazine has ranked NVIDIA #1 in innovation in the semiconductor industry for two years in a row. For more information, see www.nvidia.com.