REDMOND, Wash., March 8, 2019 - Wa-hoo! It's almost time for Mario Day! Every year, people celebrate the mustached hero of the Mushroom Kingdom, Mario, on March 10, aka Mar10 Day. For this year's celebration, Nintendo is offering a special deal on select Mario games for the Nintendo Switch system. Between Sunday, March 10, and Saturday, March 16, anyone outside the Mushroom Kingdom can purchase select Nintendo Switch systems and one of five select games starring Mario for a suggested retail price of only $329.98. 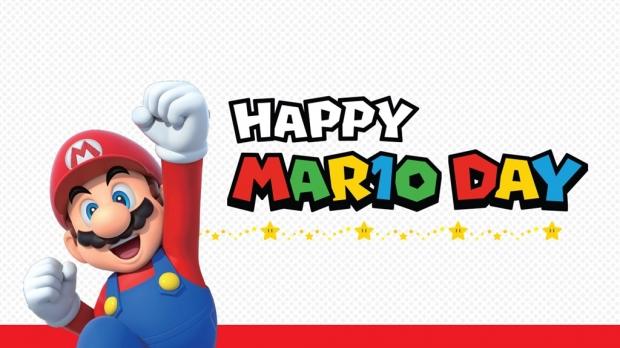 That's a savings of $30, which amounts to 50 percent off one of the games. People that already own Nintendo Switch can still take advantage of the promotion, as they can purchase a digital download code from participating retail stores or retailer websites to redeem in Nintendo eShop for the same five Mario games for only $39.99 each. Downloaded games from Nintendo eShop live directly on the Nintendo Switch system, so it's ideal for gamers who want all their games in one place, as there's no need to carry around game cards. The five Mario games featured in the promotion, which all offer fun experiences that can be enjoyed together by the whole family, are:

To celebrate Mario's big day, My Nintendo is offering a March calendar and Mario Day wallpapers. To encourage folks to throw a Mario Day party of their own, Mario-themed invites and bingo cards are also available, as well as themed envelopes perfect for holding Nintendo eShop Cards - they make great party gifts! For more information about all the available My Nintendo rewards, visit https://my.nintendo.com/news/497ab609320d0e9d. Now is a great time to pick up Nintendo Switch. In addition to a current library of more than 1,000 games, Nintendo recently detailed many exclusive games and experiences coming to Nintendo Switch in 2019, including the first Yoshi game on Nintendo Switch, Yoshi's Crafted World, on March 29, Super Mario Maker 2 this June and Fire Emblem: Three Houses on July 26, among many others. Remember that Nintendo Switch features parental controls that let adults manage the content their children can access. For more information about other features, visit https://www.nintendo.com/switch/.

About Nintendo: The worldwide pioneer in the creation of interactive entertainment, Nintendo Co., Ltd., of Kyoto, Japan, manufactures and markets hardware and software for its Nintendo Switch system and the Nintendo 3DSÃƒÂ¢"Ã,Â¢ family of portable systems. Since 1983, when it launched the Nintendo Entertainment System, Nintendo has sold more than 4.7 billion video games and more than 740 million hardware units globally, including Nintendo Switch and the Nintendo 3DS family of systems, as well as the Game Boy, Game Boy Advance, Nintendo DS family of systems, Super NES, Nintendo 64, Nintendo GameCube, Wii and Wii U systems. It has also created industry icons that have become well-known, household names, such as Mario, Donkey Kong, Metroid, Zelda and Pokemon. A wholly owned subsidiary, Nintendo of America Inc., based in Redmond, Wash., serves as headquarters for Nintendo's operations in the Americas. For more information about Nintendo, please visit the company's website at https://www.nintendo.com/.