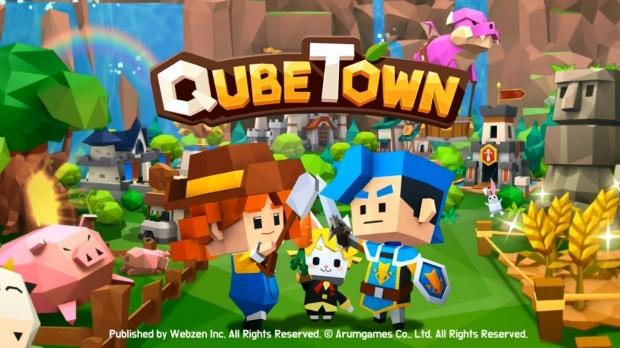 QubeTown is a new farming simulation game based on social network games that challenges users to manage their own town by constructing buildings, producing crops, trading goods and protecting their citizens. With its worldwide release in January, QubeTown is now available for free download on both the App Store and Google Play.

The latest update patch for QubeTown adds a new minigame called "Qube-Pop" which allows users to compete against friends by earning points on a stage of 10x10 blocks.

To join in on this new minigame, players need to reach Level 9 in-game and bring the required production materials to the Ticket Shop to create Qube-Pop Tickets to enter the Stadium. Once in the stadium, players drag the queued blocks located on right-hand side of the Stadium to fill the empty spaces with the blocks horizontally or vertically to clear them and earn points. While playing Qube-Pop, several items such as Bomb, Hourglass, and Guided Arrow will be available to help you score even more points.

At the end of the event, participants will be able to earn more Rubies, Gold, Upgrade Materials and other rewards based on their ranking. The Qube-Pop event will be running for a week, starting on February 25th to March 3rd, 2019 (UTC). To learn more about the Qube-Pop minigame, a new gameplay video is now available on the official Facebook page: https://www.Facebook.com/QubeTown/videos/255805841806042/

Additionally, Webzen invites casual gamers from all over the world to come and join the QubeTown Live Stream to discover more about the new farming mobile game QubeTown. Interested users can play and explore, share amusing stories and game tips, make new friends and get free promo codes by watching this fun live stream on the official Twitch and YouTube channels as well as on Facebook.

To learn more about QubeTown, players can visit the official QubeTown website: http://qubetown.webzen.com/. Casual game enthusiasts are also invited to discuss the game and participate in the latest events or giveaways on the official Facebook page: https://www.Facebook.com/QubeTown.

QubeTown is a mobile town simulation social network game that essentially challenges users to manage their own town by constructing buildings, producing crops, trading goods and protecting their citizens from nasty trolls. QubeTown is available for free download on the App Store and Google Play. Further information on QubeTown can be found at: http://qubetown.webzen.com/

Webzen Inc. is a global developer and publisher of a variety of PC and Mobile games such as MU Legend, MU Origin, MU Online, Rappelz, Flyff, the Metin series and an array of exciting game titles listed for release in the global game market. Webzen has expanded its publishing services to Europe, North and South America and other countries by operating its global game portal 'Webzen.com', hosting 60 million players from all over the world. Webzen is currently working on the upcoming releases of MU Origin2 amongst other game titles. Further information on Webzen and its games can be found at: www.webzen.com