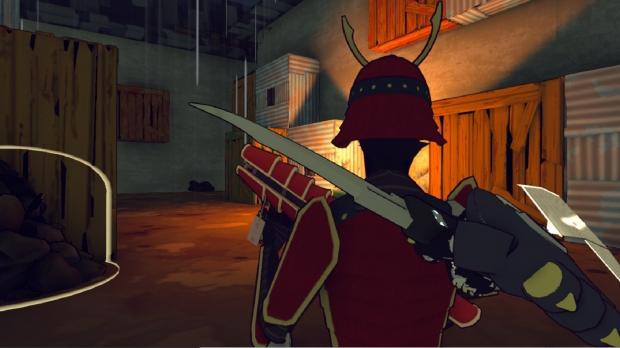 In a far future atomic war almost wiped out humanity. The few remaining survivors took shelter in the sprawling sewer system beneath Tokio under the guidance of an AI that offered nothing short of guaranteed survival. Hundreds of years have now passed, and the benevolent overlord slowly became the oppressor. Now, as a cybernetically enhanced ninja, it's up to you to overthrow the AI dictator and lead humanity to a new future.

"Shadow Uprising" brings high production values to VR, offering nine fully realized levels for players to sneak their way through. For those brave enough to take the enemy on head-to-head, eight different weapons will be at your disposal as you mix-up your attack strategy using shadows and verticality to your advantage. Use the unique Grab-and-Lock System to gain the upper hand as you climb walls and scale buildings, or zipline your way to safety with the mechanical hookshot ability grafted into your hands.

""Shadow Uprising" is the culmination of years of experience in working with many VR studios across the world," stated Tal Ron, Lead Developer at Amber Eye Studio. "It's an exhilarating experience that can be tackled in many ways, designed specifically with the ideal of empowering the player; we don't tell you how to play, we give you the tools to become the ninja you want to be!"

Featuring nine levels and over 30 secrets to find, "Shadow Uprising" is a deep and enthralling VR experience unlike anything you've seen before. "Shadow Uprising" is available now via Steam, priced at $19.99 USD / Ã,Â£15.49 GBP / Ã¢,Â¬16.79 EUR, compatible with both Oculus Rift and HTC Vive.

Amber Eye Studio is a virtual reality gaming development studio based in the sunny island of Cyprus. Founded in early 2018, the Amber Eye is has recently made its debut with the futuristic ninja warrior game, "Shadow Uprising".