IRVINE, Calif. - September 4, 2018- SEGA of America is happy to announce that the original Valkyria Chronicles is heading to the Nintendo Switch eShop on October 16, 2018! Experience the tale of Lieutenant Welkin Gunther, Sergeant Alicia Melchiott, and their comrades in Squad 7 in Valkyria Chronicles on the Nintendo Switch. With stunning graphics from the CANVAS shader, this is the perfect way for fans to experience Squad 7's story for the first time or rediscover it on a brand-new platform. See the game in action in the announcement trailer!

The game will be available digitally on the Nintendo eShop for the Nintendo Switch on October 16, 2018 for $19.99, giving players the ability to command Squad 7 on the go for the first time on a Nintendo platform. Additionally, anyone who purchases Valkyria Chronicles 4 (releasing September 25, 2018) through the Nintendo eShop will automatically receive a $5.00 discount during checkout for Valkyria Chronicles - 25% off the original price! This promotion will run from the game's launch on October 16, 2018 to December 17, 2018. 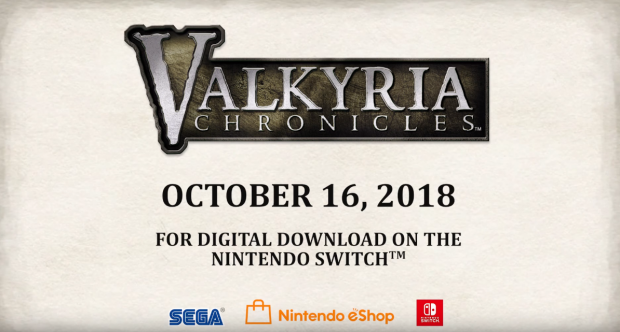 Take the fight to the Empire with the Valkyria Chronicles 4 "Memoirs from Battle" premium edition, and dive into two new adventures with your favorite Squad 7 characters from the original Valkyria Chronicles. This special edition release (MSRP - $99.99) comes equipped with an exclusive artbook themed as Claude's travel journal from the game and a replica of his mighty tank, the Hafen. Arm yourself for the battle ahead by pre-ordering the "Memoirs from Battle" premium edition today at http://valkyria.sega.com!

Exclusive to the Valkyria Chronicles 4 "Memoirs from Battle Edition"*:

Squad 7 DLC missions are available immediately through a download code included in the "Memoirs from Battle Edition." They will be available as an add-on item on all platforms around the game launch.