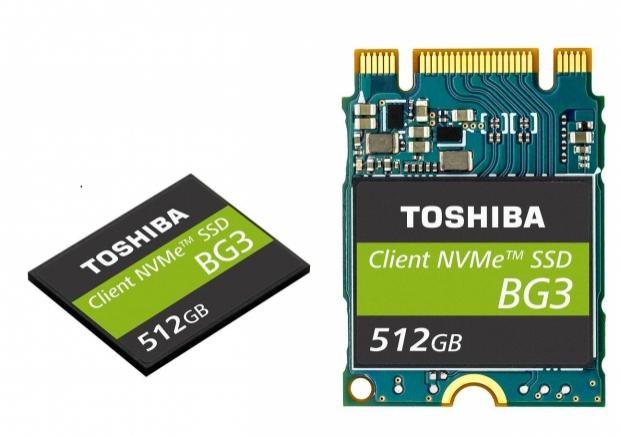 Designed to fuel the future of mobile devices, Toshiba's BG3 SSDs deliver better performance2 and a smaller footprint than traditional SATA-based drives. Moreover, with its cost-effective DRAM-less design, the unique BG3 series enables a high quality user experience at a fraction of the power requirement of other NVM Express3 (NVMe) SSDs4.

With style and portability top of mind for today's laptop and tablet manufacturers, the BG3 series was designed specifically to enable even slimmer and more power efficient devices. By eliminating DRAM from its design, Toshiba's BG3 series offers the world's thinnest SSDs5 available at just 1.3mm high and delivers lower power consumption to maximize battery life.

The ultra-compact BG3 series is available in 128GB, 256GB, and 512GB capacities9. All three models are available in a surface-mount BGA (M.2 1620) or a removable module (M.2 2230) form factor for platform design flexibility.

"The BG3 series is not only smaller and lighter, but smarter thanks to its cost-effective DRAM-less design with HMB technology combined with Toshiba 64-layer 3D flash memory with TLC technology. These SSDs enable OEMs to reimagine what's possible for their customers."

"Every data center is pursuing ways to reduce both capital and operating expenses. The BG3 series addresses these concerns by providing boot storage with improved power consumption and a compact footprint at appropriate capacities."

The BG3 series is sampling to customers and will be demonstrated at the Flash Memory Summit 2017 in Santa Clara, CA, from August 8 to 10 in booth #407.