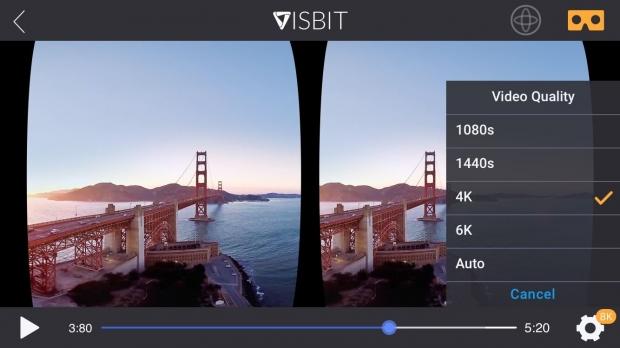 VR content publishers and developers can now access 4K+ VR streaming technology across all mobile VR platforms including Google Daydream View and Cardboard for iOS, as well as most major mobile and desktop browsers

"Unity support has been a long-time request from our customers. We are proud to bring 4K+ VR video streaming to the Unity community," said Dr. Changyin Zhou, Visbit co-founder and CEO. "We're also adding the Web VR Player, which dramatically reduces the difficulties of distribution and improves access for general consumers of VR and 360-degree experiences. Now content creators can generate a web link on the Publisher Portal to share their work, or embed video links on their website, while still protecting their content with domain-level privacy."

This release marks a significant service expansion for the company. In addition to the Samsung Gear VR and Cardboard for Android, which Visbit already supports, the Unity SDK bring support for Google Daydream View and Cardboard for iOS. Though streaming is optimized overall, the Unity SDK stands out when used to develop Android apps for Google Cardboard because it pulls on patented VVOS technology, allowing 4K and above resolution streaming over regular Wi-Fi and LTE networks, with little to no latency.

Visbit's newly released Web VR Player is compatible with the widest range of mobile and desktop browsers. Though it does not use VVOS technology, it still allows for the smooth playback of 360-degree VR videos, even in 4K and stereoscopic, and can do so in panning, gyro and VR modes on Chrome, Safari, FireFox and Microsoft Edge. Videos are also protected with domain-level privacy to ensure that they are played only where the IP owner wants. These features are especially outstanding considering that most web players fail to play 360-degree videos well on Safari or any browser on iOS, and do not support stereoscopic.

Visbit is currently in open beta and customers can sign up at www.visbit.co. The company will continue expanding platform support for its VR streaming service, including desktop and console VR headsets.

Visbit Inc. is a visual technology company enabling 360-degree videos and VR content to be easily streamed and viewed at the highest possible quality across multiple platforms. With its patented Visbit View-Optimized Streaming (VVOS) technology, Visbit offers content publishers and app developers the world's first all-in-one streaming service that can deliver and play 4K to 12K resolution 360-degree VR videos without noticeable latency over regular Wi-Fi and LTE for mobile and eventually all VR headsets. The service is made of a publisher portal for content management and BI analytics, a VR cloud for transcoding, streaming via CDN and hosting, and a set of VR player SDKs.

The company was founded in 2015 by Dr. Changyin Zhou and Elaine Lu, and is headquartered in Sunnyvale, CA, USA. For more information go to www.visbit.com