AMD (NASDAQ: AMD) today ushered in a new era for high-performance server processors and the datacenter with EPYC. With its high core count, superior memory bandwidth, and unparalleled support for high-speed input/output channels in a single chip1, EPYC aims to revolutionize the dual-socket server market while simultaneously reshaping expectations for single-socket servers. Previously codenamed "Naples," this new family of high-performance products for cloud-based and traditional on-premise datacenters will deliver the highly successful "Zen" x86 processing engine scaling up to 32 physical cores2. The first EPYC-based servers will launch in June with widespread support from original equipment manufacturers (OEMs) and channel partners. 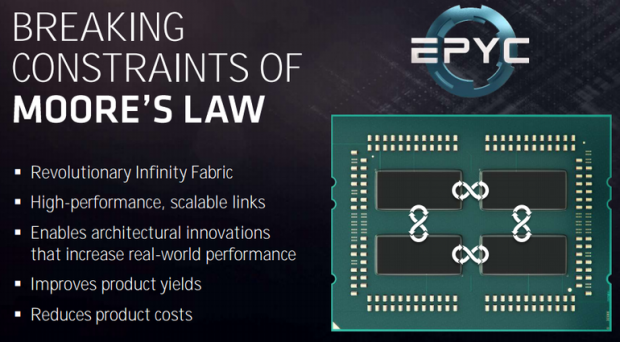 "With the new EPYC processor, AMD takes the next step on our journey in high-performance computing," said Forrest Norrod, senior vice president and general manager of Enterprise, Embedded & Semi-Custom Products. "AMD EPYC processors will set a new standard for two-socket performance and scalability. As we demonstrated today, we see further opportunity with the industry's first no-compromise one-socket solutions. We believe that this new product line-up has the potential to reshape significant portions of the datacenter market with its unique combination of performance, design flexibility, and disruptive TCO."

"Dropbox is currently evaluating AMD EPYC CPUs in-house, and we are impressed with the initial performance we see across workloads in single-socket configurations," said Akhil Gupta, vice president of infrastructure at Dropbox. "The combination of core performance, memory bandwidth, and I/O support make EPYC a unique offering. We look forward to continuing to evaluate EPYC as an option for our infrastructure."

"Today's single-socket server offerings push buyers toward purchasing a more expensive two-socket server just to get the memory bandwidth and I/O they need to support the compute performance of the cores," said Matthew Eastwood, senior vice president, IDC. "There are no fully-featured, high-performance server processors available today in a single-socket configuration. EPYC changes that dynamic by offering a single-processor solution that delivers the right-sized number of high-performance cores, memory, and I/O for today's workloads."