The latest and most important Operating Systems news - Page 9.

iOS 9.3 causing problems on some older devices, Apple pulls it

The much-hyped iOS 9.3 update hasn't gone smoothly on older devices (specifically, the iPhone 4S, 5, 5C, and 5S; and the iPad 2, third- and fourth-generation Retina iPads, and the iPad Air), preventing users who forget their Apple ID passwords from activating their devices. 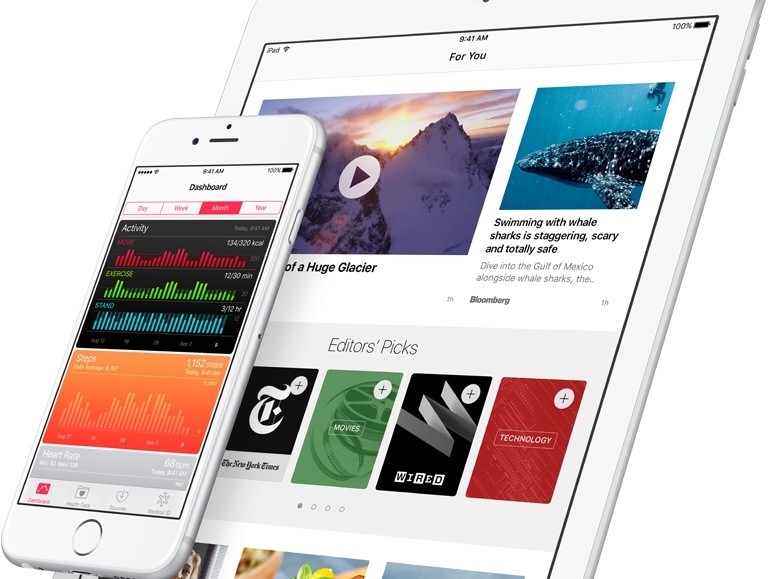 As such, they've pulled the update and in the meantime, they advise you try to reset your password or disable the Activation Lock feature via iCloud.com or by connecting your device to a computer with iTunes. Another option is to downgrade to 9.2.1 by clicking Update or if that fails, Restore, but be warned: this may erase your data.

A new version of the update has been released for the iPad 2, so users should be good to go on that front. The rest of you will be taken care of "in the next few days."

General Manager of Core Ux for Windows Desktop, Tablet and Phone Peter Skillman confirms on Twitter that Microsoft is working on a "total update" of File Explorer, the default file manager application that lets you navigate the contents of Windows.

@HUGEMSFAN Yes we are working on a total update of file explorer! Can't articulate schedule yet. You are right.

He later clarifies the tweet was intended to be private and for a Microsoft employee. Nevertheless, the cat is the out of the bag.

Windows 7, 8 will support Skylake for an extra year

Intel Skylake users who aren't in any hurry to upgrade anything are in luck: Microsoft has extended Windows 7 and 8 support for the prized microarchitecture for an extra year, now extending to July 17, 2018. Extended support (critical updates) will continue until 2020 and 2023, respectively. 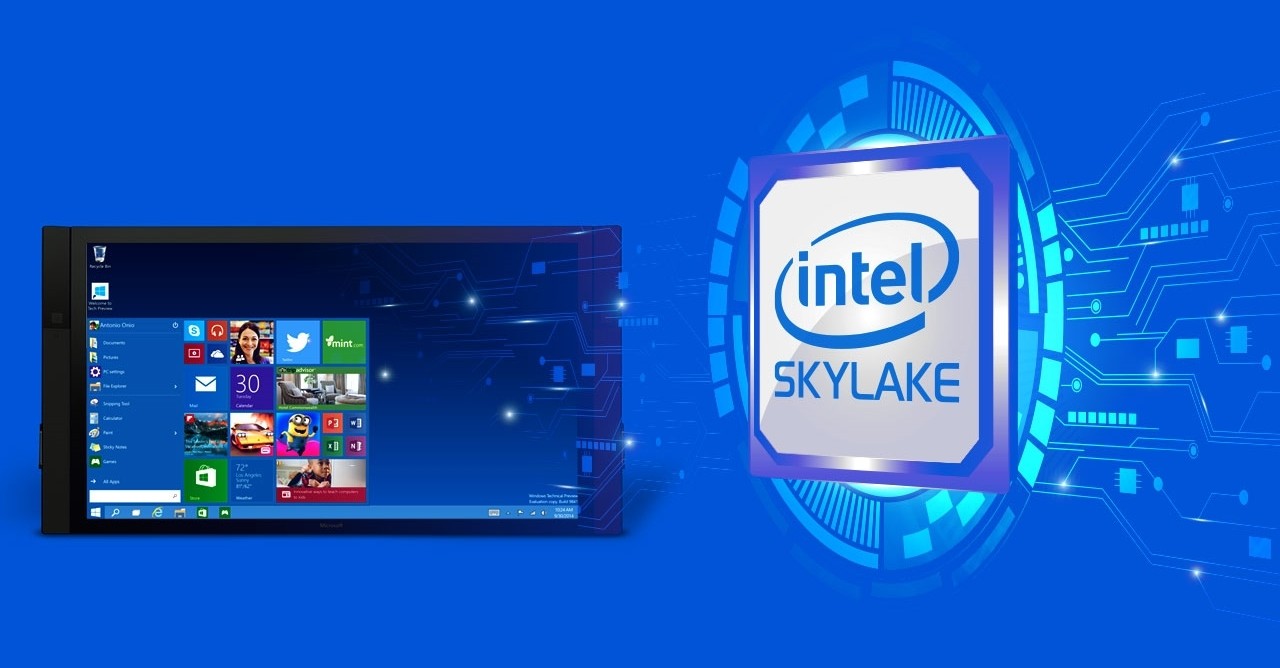 The company says the change is a bid to "provide greater flexibility for customers who have longer deployment timeframes to Windows 10" (businesses especially fit into this category) and to help customers "purchase modern hardware with confidence, while continuing to manage their migrations to Windows 10."

Programmer community site Stack Overflow's new survey sees OS X overshadowing Linux again this year as the more popular operating system among developers. Although Windows still leads the pack (currently at 52.2%, including the different versions), it's expected to continue trending downward, below 50% by this time next year. 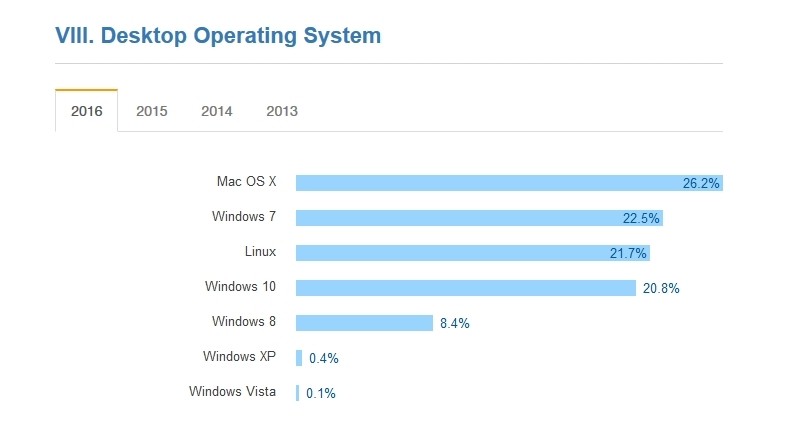 The survey -- which covers many topics -- is based on answers from more than 56,003 developers among 173 countries, which is said to make it the "most comprehensive developer survey ever conducted." Stack Overflow notes the survey is inherently biased against developers who don't speak English, at least not as their native tongue.

Continue reading: Less than half of developers expected to use Windows by next year (full post)

Out of nowhere, Google has released Android N in preview form, limited to Nexus smartphones and tablets. Android N is a very early beta of Google's next mobile OS, something it should release in fuller, more finished form as we get closer to Google I/O in mid-May. 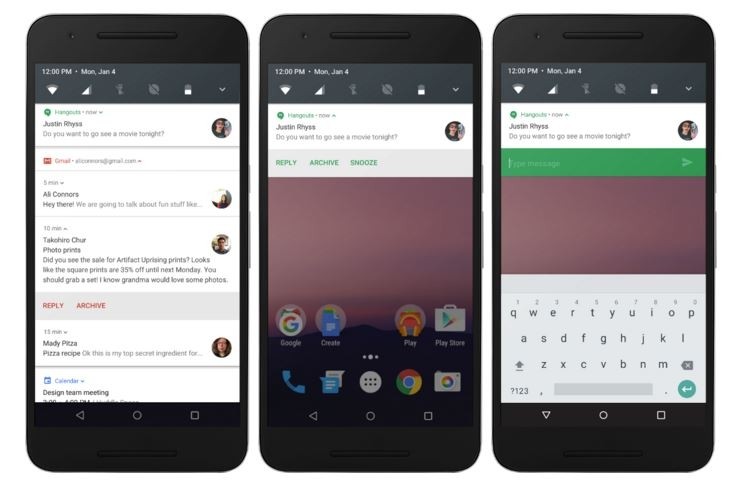 For now, the beta is available on g.co/androidbeta and judging by the screenshots - Android N has three big new features. The first is split screen, for an improved multitasking experience - something that the likes of Samsung have been doing with TouchWiz on their Galaxy smartphones for a while now.

The second one is a new notifications panel, and a new and improved Doze power saving feature. There's heaps more in Android N, with a full list of what the Preview has to offer.

Latest Windows 10 preview has lots of love for Cortana

Windows 10 Build 14279 has been released today to Windows Insiders on the Fast ring. 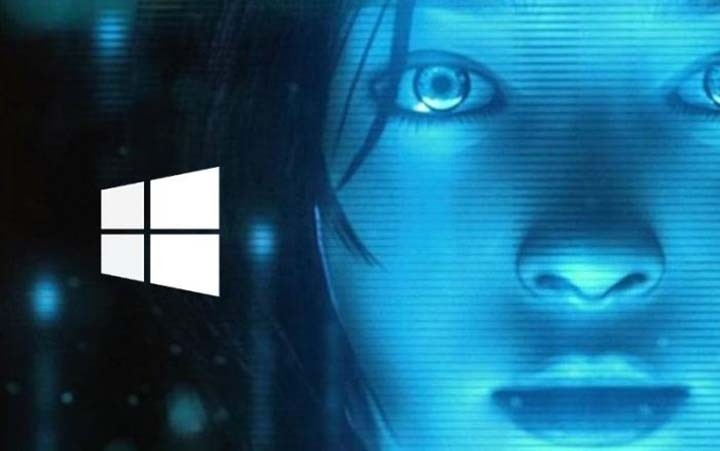 If you're a big Cortana user, this one should make you very happy: Spanish (Mexico), Portuguese (Brazil) or French (Canada) languages are now supported, as are quick reminders. To set a quick reminder, say something like "remind me to read [insert book name]", or "remind me to wash the car". After doing so, you can set details like location, time, and people if you like. It's not built-in yet, but soon you'll be able to retrieve these reminders as a real PA would.

The other significant update is a unified Lock and login screen. Going forward, the Lock screen background will be used for both, as on mobile, making for a smoother experience.

Apart from that, there's Sway and Photos integration, a Featured section for the Xbox app, and more. For all the details, hit the source.

Microsoft teases benefits of DirectX 12 in a new video

Microsoft has a few tricks up its sleeve when it comes to Windows 10, with one of them being DirectX 12. We loved the explicit multi-GPU support found in Ashes of the Singularity, powered by DX12.

Well, the company has just released a new teaser video that shows off the benefits of DX12, with the vide featuring footage from DX12-powered titles like Quantum Break, Forza Motorsport 6: Apex, Gears of War: Ultimate Edition, Ashes of the Singularity, and Just Cause 3.

Microsoft says that DX12 offers up to 20% more performance from your GPU when compared to DX11, and up to 50% from your CPU.

Microsoft's takes the opportunity to make digs at Apple in its new Windows 10 ads. Featuring "the bug chicks" (two women who teach kids about bugs for a living), they praise functionality like touchscreen drawing and Cortana, then say things like, "Even on the new Macs they don't have that."

Also, real bugs are shown. In other words, if you're an Apple fan with a fear of bugs, these ads will make you simultaneously angry and terrified.

Valve's Linux-powered SteamOS now supports the Vulkan API, the cross-platform alternative to DirectX 12. For SteamOS users, this should result in significantly better performance when gaming, as well as more SteamOS games. 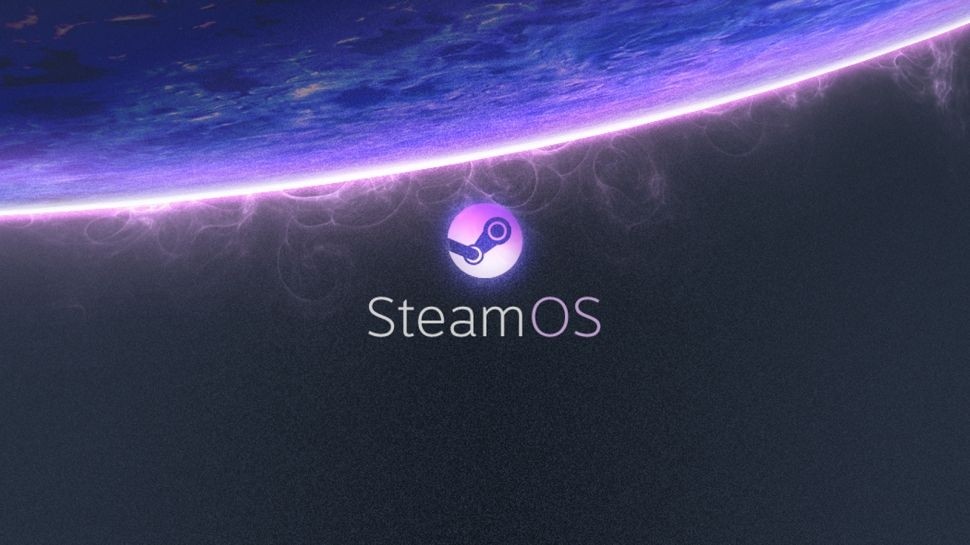 The latest version of SteamOS includes version 355 of the NVIDIA Linux driver, which supports Vulkan, so from here on out, it's good to go as far as NVIDIA hardware is concerned. Intel are said to be hopping on board soon too, and with an open-source driver, no less (NVIDIA's is closed-source). As for AMD, it is currently working on the Vulkan-friendly AMDGPU, which will replace its Linux/SteamOS fglrx driver.

Wanna run Windows 98 for some reason? Why not in your browser!

Through the magic of a well designed JavaScript engine you can play with a Windows 98 virtual machine right in your browser, playing some classic minesweeper just as it was originally intended.

The emulator is capable of only basic x86 emulation at the moment, but the small program is a great example of just how capable JavaScript, in the hands of adept programmers, can actually be. You won't be able to do anything more than simple tasks, and can't play retro games, but it's certainly a very interesting project.

What's more, the individual whose made the project has also been able to emulate Windows 1.01 and certain versions of Linux that all work just swimmingly. So if you're of the generation that never knew the glory of Windows 98, now's your chance to play around without having to install it in your own virtual machine. And you can easily dabble in Linux without the need for a Live-CD and even dabble in FreeDOS.

Continue reading: Wanna run Windows 98 for some reason? Why not in your browser! (full post)