It looks like console gamers are having fun with the Microsoft Xbox One and Sony PlayStation 4, as both next-generation game consoles outpace their predecessors. Since both consoles launched in November 2013, both consoles have a 73 percent higher installation base, than the Xbox 360 and PS3 over the first year of introduction for both consoles. 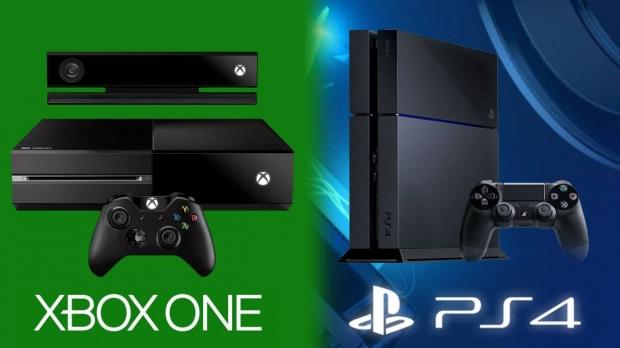 During its Q3 financial earnings call, GameStop reported new hardware sales rise 147.4 percent, with thanks largely to the Xbox One and PS4. The gaming market is very much alive and well, and with numerous anticipated game launches in 2015, gamers will have plenty of new titles to choose from.

Project Cars will run on Microsoft Xbox One at 60fps

Bandai Namco's Project Cars video game will run at 60 frames per second on the Microsoft Xbox One when it is released on March 17, 2015. Game developer Slightly Mad Studios wanted to reach 1080p resolution for the Xbox One and Sony PlayStation 4, but didn't confirm if that goal was reached just yet. 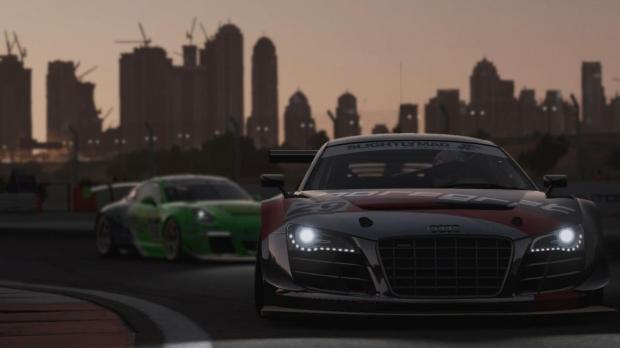 "You've played it in Dubai, London, Madrid, and Paris, but for those that couldn't jet-set around the world, sit back and take a more leisurely look at Project Cars on Xbox One, running at 60 frames per second," according to Bandai Namco.

The game will launch for the Xbox One, PS4, Nintendo Wii U, and PC. It was originally scheduled for a November 2014 launch, but was forced to delay the game without specific details offered to gamers.

Valve has made the 'PC Master Race' proud, sending out an updated set of Early Access rules and guidelines to supported developers earlier this week. This is said to ensure that they 'set proper expectations' of their game when customers decide to utilize this offering. 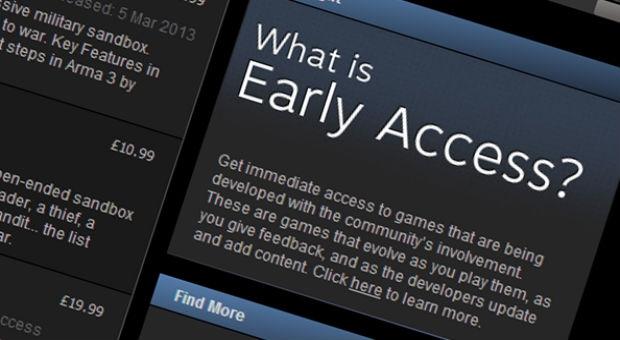 This announcement has reportedly come around due to users being generally unhappy with Early Access protocols and offerings. It's been claimed that developers have been releasing Early Access games before fans felt they were properly complete or have stopped development on the game all together - meaning Valve had to remove them from their Steam platform. Giant bomb originally released this information to the public which follows an interesting report that claims most Early Access games still function in BETA even after 20 months have passed, alongside this only 25% of games have been fully released.

This seems like not only a way for Valve to ensure customers are happy with the games that they are playing, but for developers to actually carry out the purpose of Steam Early Access which is quoted as by Wikipedia: "Early access, alpha funding, or paid-alpha is a funding model in the video game industry by which consumers can pay for a game in the early stages of development and obtain access to playable but unfinished versions of the game, while the developer is able to use those funds to continue work on the game."

Snoop Dogg to make an appearance in into DOTA 2

Dota 2 is one of the big-hitters in the global eSports scene, seeing millions of dollars of prize money distributed each year in a massive once-off event named "The International" and viewed live by hundreds of thousands of screaming fans across the globe. 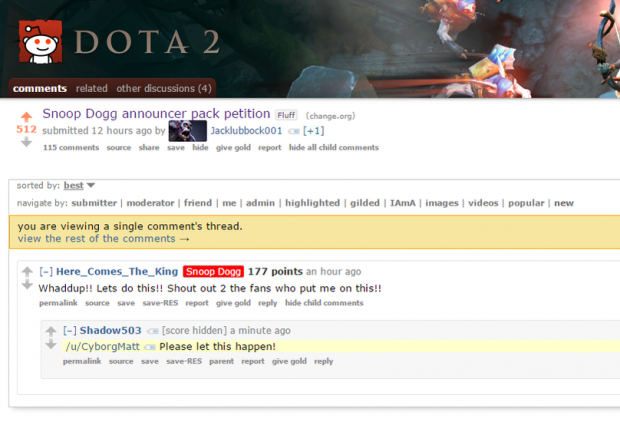 As amazing as this sounds, you can't forget the small things. Dota is well known for keeping in constant contact with its community members, providing support through community generated tournaments being published in their in-game client, to model developers being able to sell their products officially through Valve services.

In comes the latest installment in Dota's lifespan - Snoop Dogg. If you're interested in a little variety of game play, Dota2 allows players to change up their 'announcer' voice pack, meaning that all in-game announcements will come through a different voice than the official standard one supplied. Thanks to Snoop Dogg's popular involvement in meme culture, some savvy Dota2 players had decided to create a partition to get the Dogg in on this project, linking it back to Reddit.om's Dota2 section.

Continue reading: Snoop Dogg to make an appearance in into DOTA 2 (full post)

A post on the DOTA2 subreddit has shown the world that Valve has just sneaked in some form of in-game ad for DOTA2, which popped up onto a Redditor's game asking them if they'd like to buy a Charm of the Defender's Vision. 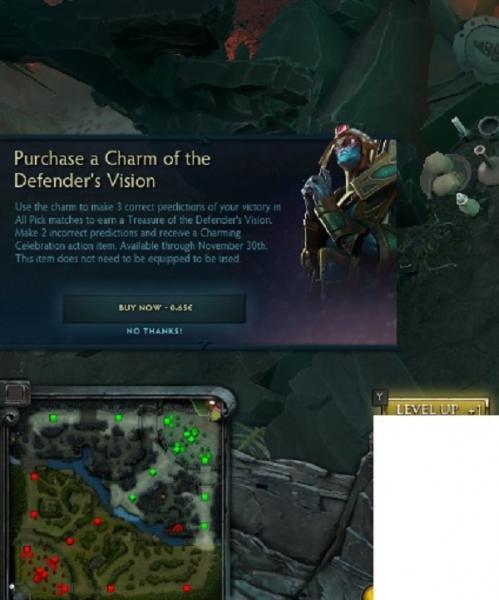 You can click 'No Thanks!' but this still doesn't take away from the fact that Valve just slipped in-game ads into their games. The title of the post in the DOTA2 subreddit is pretty harsh, and rightly so: "Valve has now introduced IN-GAME ADS, I hope nobody is ok with this."

What do you think about Valve introducing in-game ads to DOTA2?

Nintendo hopes consumers open up their wallets for Christmas

The Nintendo Wii U game console has been available for two years, but with the upcoming launch of Super Smash Bros., Nintendo hopes to see a higher sales boost. Since launching Mario Kart 8 in May, there have been more than 1.1 million Wii U consoles sold - and as consumers have extra cash to spend ahead of Christmas, Nintendo wants shoppers to spend. 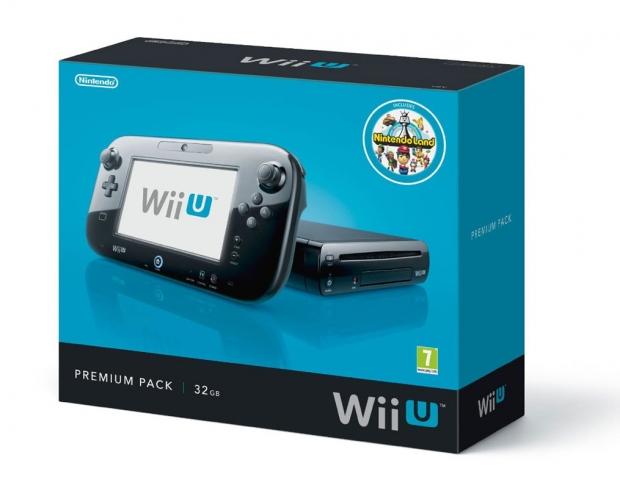 Nintendo has taken a few different public shots against Microsoft and Sony in recent weeks, trying to remind shoppers the company has products for them to consider. Nintendo of America President Reggie Fils-Aime shrugged off the Xbox One and PlayStation 4 game consoles, saying the two platforms have too much overlapping shared content.

He also said the Wii U provides a better value than both consoles, despite recent price cuts that have made the console gaming market extremely competitive.

A scam that allowed customers to purchase Sony PlayStation 4 consoles from $50 to $100 by creating fake ads online, has been nixed by Walmart. It's not surprising to hear Walmart moved quickly to prevent further lost revenue, especially as more satisfied customers boasted their success via social media. 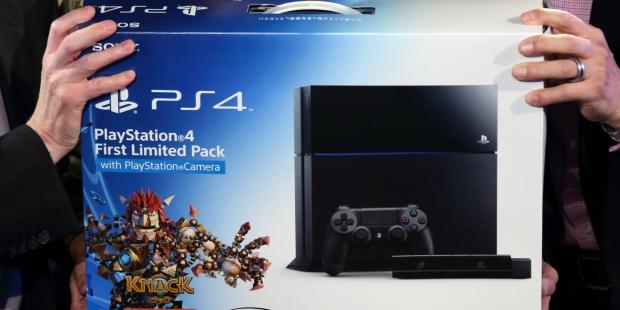 "We can't tolerate fraud or attempts to trick our cashiers," Walmart said in a statement. "This kind of activity is unfair to the millions of customers who count on us every day for honest value."

However, Walmart will match rival sales listings from Amazon, Best Buy and other retailers on Black Friday, as retailers fight for consumers. It will be curious to see how Walmart decides to verify price matches, to better prevent future scams. 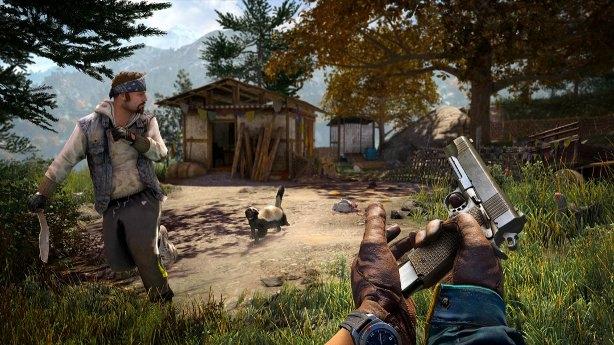 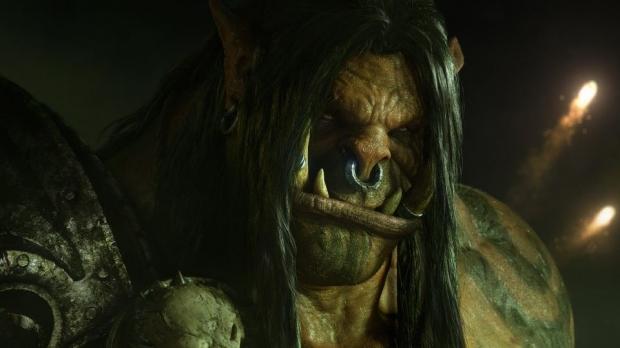