All the latest display and project news, with everything related to gaming monitors & plenty more - Page 59. 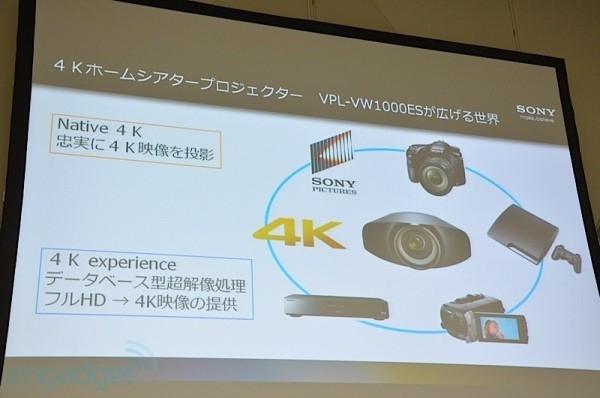 LG have introduced a new TV range dubbed "Dual View". The new Dual View televisions allow gamers to use the same television but see different images thanks to a new style of 3D glasses. The new tech was shown off by Microsoft and is set to go on same with a limited number of LG TV's, displays two separate pictures on the same screen, and then uses the power of the new 3D -style glasses to ensure each player can see a different image each. 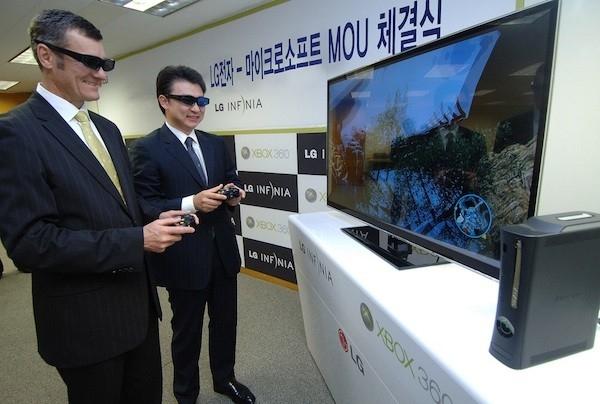 Screen cheating be gone! This new tech is only available on the Xbox platform and works with LG's Cinema 3D range, inclusive of the new flagship LW980T. Gamers will have to slap down more dinero for additional pairs of special glasses. Usually gamers play with split screen, but this new tech would allow both gamers a full-screen gaming experience, with each of them looking at completely different images.

MacRumors have picked up on a number of non-posted images from Apple.com, showing Apple having a $999 display. In the pics, the display has a new part number (which is in the URL), and a newer background to match the default wallpaper of Mac OS X Lion which is being released next week. What makes this interesting is the below pic which shows two of the newer displays, with one plugged into the other. 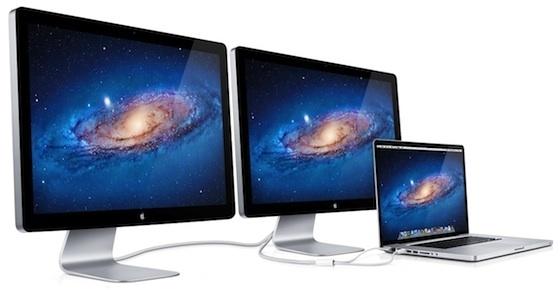 Maybe Apple are allowing mirrored or extended displays through USB, but most likely this is Thunderbolt-powered and it's down with the latest-generation iMacs which share many design similarities with the LED cinema display. If Apple wants to push Thunderbolt, this would definitely be the way to go about it. On something like a MacBook Pro, using the Thunderbolt port just to power a monitor would use up the port, but daisy-chaining them like this would allow a user to use the Thunderbolt I/O on the MBP, then daisy-chain something directly into the Cinema Display.

Thunderbolt is capable of daisy chaining up to seven Thunderbolt-equipped devices together, whilst retaining full speed across ever single one of them, this is thanks to the existing DisplayPort and PCI-Express data protocols to open up what you can do with a single port into multiple uses and at high speeds.

Eizo have unveiled their latest beast of a monitor, the 36-inch DuraVision FHD3601. The FHD3601 spots a native resolution of, wait for it, 4096x2160. The monitor is LED-backlit, features a 10-bit panel supporting 1074.74 million colors, 700cd/m2 brightness and a contrast ratio of 1000:1. The viewing angle is 176 degrees which suggests that Eizo are using a Sharp ASV panel. 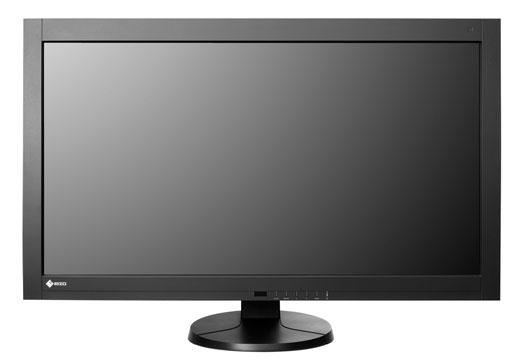 The DuraVision FHD3601 includes all the advanced technology Eizo has been developing for the past few years, inclusive of their human presence sensor and the Digital Uniformity Corrector (DUE) that ensures perfect light homogeneity. Eizo plan to launch this puppy in Japan on September 7, 2011 at a price of 2.88 million Yen, or approx US$36,000. Eizo hope the FHD3601 appeals to example flight control centers, oh and me.

Anthony Garreffa | May 22, 2011 9:39 PM CDT
If this were my own tech site, where I didn't have to type up a few paragraphs on the news I post, the only word that would accompany this news would be: Wow. I would end it with "Wow" and a link to the YouTube video - but holy bloody crap, Sharp and Japanese national TV broadcaster, NHK (Japan Broadcasting Corporation) have jointly developed an 85-inch LCD compatible with Super Hi-Vision, a next-generation television broadcast format.

The new format comprises of 33 megapixels, or 16 times the resolution of HDTV, Super Hi-Vision is being pushed as offering a powerful, life-like image reproduction. R&D began in 1995 (!) and they aim to have trial broadcasts before the decade ends. Sharp used their UV2A2 LCD technology which allows them to create the first direct-view LCD compatible with the insanely high resolution performance of Super Hi-Vision. 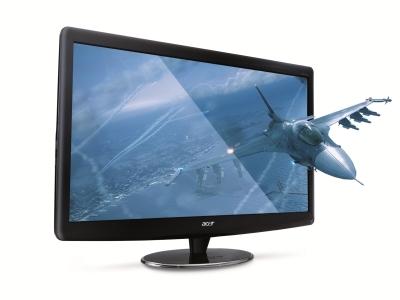 Better yet, the Acer HN274H has the IR emitter built-in! Acer are even throwing in a pair of NVIDIA 3D glasses too. Acer have also added their eColor and Adaptive Contrast Management technologies which work dynamically to (apparently) deliver ultra-sharp and realistic visuals, here I was thinking that was the GPU doing that. The monitor looks great and I would definitely love to try one of these puppies out, Acer. Might be upgrade time for my Surround Vision Alienware setup!

Nicole Scott | Apr 12, 2011 6:42 AM CDT
Intel put on a series of demo's at Day 0 of IDF Beijing 2011 showing off various ways that camera recognition, both facial and gesture, could be applied to everyday life.

The first demo controlled an avatar by mapping the human face to cause the avatar to animate on-screen characters to precisely replicate mimic facial expressions and head movement. The second demo has been making the rounds but we still love it since the idea of having in on our home TV excites since it would make looking at photo's a more interactive experience. One can control and navigate the user interface with the wave of a hand as well as zoom and rotate.

It is like having a Kinect, but all you need is a webcam! The big one that I thought was the best of the bunch was facial recognition to deliver directed personal advertising. That's right, your TV will watch you figure out how many males and females are in the room, whether they are young or old and even detect if they are happy or sad. Based on this information they will then service an appropriate targeted ad. Creepy, just a little. 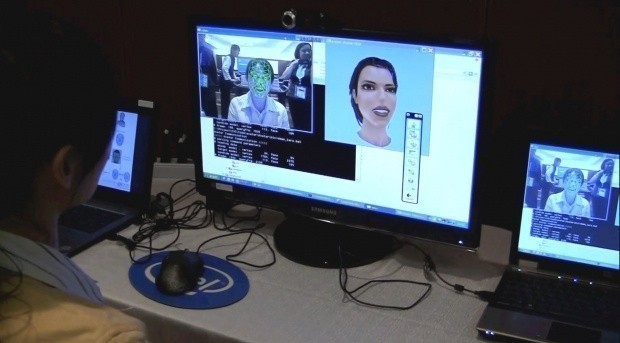 The final demo takes that creep factor to the next level as your TV will identify you personally, and then it will suggest shows for you based on your viewing habits. The technology will continue to watch you to see if you are enjoying the program and even note if you are looking away from the screen.

Shane McGlaun | Feb 3, 2011 12:51 PM CST
There are tons of TVs on the market today that run the gamut from small screens that fit in smaller rooms or for those on a tight budget to massive screens that run thousands of dollars and have all the bells and whistles. If you are looking for a smaller screen LED backlit HDTV to fit in a bedroom or office Sceptre has some really cool offerings and has added some new sets to its Galaxy Line.

The Sceptre Galaxy series TVs are available in several colors including black, pink, red, blue, and chrome. The colors are a nice touch, but the specs are what most people are concerned about. The line has full 1080p resolution for the 24-inch screen and the TVs can be used as a PC monitor as well. The TVs are under an inch thick at their thinnest point and slightly under 2-inches at their thickest.

The dynamic contrast ratio for the screens is 14,000:1 and the panel response time is 5ms. Connectivity includes dual HDMI ports, the sets have a USB port as well for direct viewing of photos, and audio files from a flash drive. The sound system in the TV has a pair of 3W speakers and brightness is 250 cd/m2. The sets are widely available for $399.99.

Shane McGlaun | Feb 1, 2011 2:02 PM CST
Epson has projectors that are for mobile pros, education, and home theater fans in its line up and many of the offerings from the company are among the best in their classes. Epson has announced today that it has two new projectors going into the line aimed at education use. The projectors would work equally as well in the office and other settings too.

Other features of the two are common like HDMI inputs, 16W speakers, and mic inputs. The projectors have plug and play capability for showing presentations from a computer. They can be turned on and off from a wall switch and the projectors have a 1.6 x optical zoom. Both of the projectors will ship in March around the country online and in stores.

Shane McGlaun | Jan 18, 2011 1:06 PM CST
LCDs that get connectivity for video and power from a single USB port aren't new. They have been around for a while now and are often used by folks with notebooks and netbooks to get a larger screen in the office and on the go. The thing that most of the users USB-powered screens have in common is that they tend to be small with screens 10-inches and under in size. 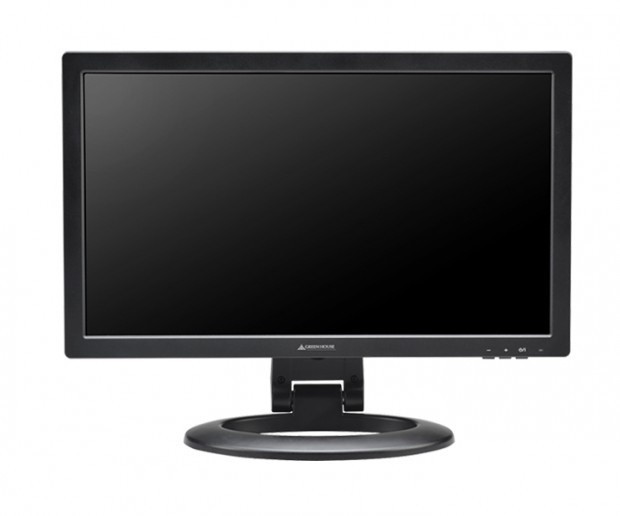 A new LCD has surfaced from a Japanese company called Green House dubbed the GH-USD16K that has a very large 15.6-inch screen. It's not that a 15.6-inch LCD is big by any means, but when you consider that the LCD gets all the power it needs to operate and the connectivity for video from a single USB port the screen is huge.

The power sipping nature of the screen is what allows it to operate on a USB port. The screen needs only 5W to operate and you can hook as many as six of the screens to one computer. The resolution is 1366 x 768 and it has a 400:1 contrast ratio. The screen has a brightness rating of 220cd/m2 and has a Japanese price that works out to about $215 in the US. There is no word on availability outside if Japan.