Looking over some of the specs listed on the supporting product page, the P500 pump used for the kit is capable of pumping 500 litres per hour and should have a very good lifespan with its hard-wearing ceramic bearing. Thermaltake has also gone with their exclusive Dimple Dimpled Tubes (DDT) technology instead of using traditional round tubes and an aluminum radiator with adjustable 120mm fan (1300 to 2400RPM).

The pure copper waterblock with reliable Brazing technology can be attached with a universal mounting system suited to all current-gen platforms, and Tt has also included their "Flow TX", a flow meter that allows one to monitor the movement of the coolant through its transparent cover for peace of mind.

Alongside the aforementioned features are some other nice touches which you can read more about at the product page here folks. 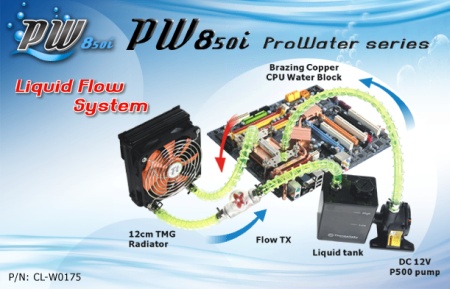 The P500 Pump used in the PW850i has a maximum high output of 500L per hour to support the liquid cooling system even under heavy load; the hard-wearing ceramic bearing further increases the life span of the pump, users will not need to worry about pump failure even with extended VGA or memory liquid cooling components. The professionally designed inlet and outlet will eliminate the possibility of air blockages. The PW850i also adopts an automotive style radiator with Thermaltake exclusive "Dimple Dimpled Tubes" DDT technology rather than traditional round tubes, and with the adjustable 120mm fan (1300~2400 RPM); CPU heat will be transmitted efficiently in the coordinated system environment.