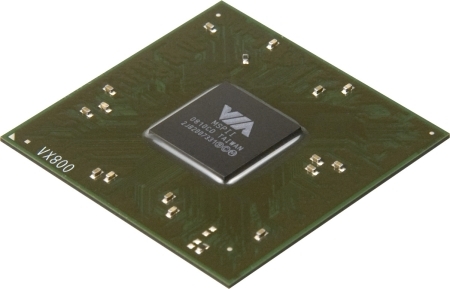 It is designed a low power consuming and affordable chip for thin & light notebook (such as UMPC and MID), mini and green PC and high performance embedded system markets.

Along with all the other goodies such as full DX9 graphics (using VIA Chrome9 HC3 integrated graphics core) and eight high definition audio channels with a 192kHz sampling rate audio (using VIA Vinyl HD Audio controller), it manages to also pack in a VIA C7-M ULV processor which all up only consumes an amazingly low maximum power draw of 5 watts. VIA also launched the VX800U which is a cut-down ultra low voltage version consuming a measly 3.5 watts of power!

Sure, it's not the latest Core 2 or Phenom based gaming chipset with overclocking and uber performance coming out the ears but when you consider the huge growth market that is UMPC and Mobile Internet Devices, the very capable VX800 should receive quite a reception in the market it is intended. Look forward to seeing it implemented in future mobile devices in the following months.

There is much more detail including chip diagrams and what not over at the VIA website.