It seems that the areas between channel 2 to channel 51 on TV sets which are not in use by cable services, or satellite broadcasts will be an ideal playground and a "once in a lifetime opportunity to provide ubiquitous wireless broadband access to all Americans."; according to the Yahoo news article.

The article hints that this move is a way forward for the internet giant to allow its online advertising business to grow as their Android mobile phone software which will be introduced in lots of mobiles begins to take over the world. Others argue that using the white space will cause interference on already pre-existing channels. While we are not sure of the outcome of this letter to the FCC, we are sure that Google never does anything in a small way.

Google headquarters, late one night.... Pinky shouts in an excited voice "Brain, what shall we do tonight then, hey?" Brain replies in a patient voice "The same thing we do every night, Pinky - take over the world!" 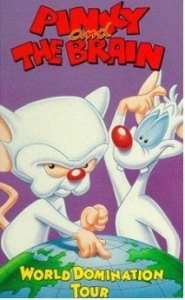