All NewsBusiness, Financial & LegalCases, Cooling & PSUContests & GiveawaysCPU, APU & ChipsetsDealsDisplays & ProjectorsGamingMotherboardsScience, Space & RoboticsStorageVideo CardsVirtual & Augmented Reality
All ReviewsAll ArticlesAudio, Sound & SpeakersCases, Cooling & PSUCPUs, Chipsets & SoCsComputer SystemsDisplays & ProjectorsGamingMotherboardsNetworkingPeripheralsStorageVideo Cards
GuidesGamingAsk the ExpertsNewsletterAboutForums
RTX 4090Windows 11Halo InfiniteBattlefield 2042Elon MuskGTA 6RTX 3080HDMI 2.1
Last week we attend a small CeBIT preview for the press in Taiwan were MSI talked a bit about ECOlution, which is MSI's take on being more environmentally friendly among other things. Possibly the most exciting of the things shown in terms of what was easy to make out was their prototype CPU fan which uses a technology similar to a sterling engine which we told you about here. Now we've gotten around to uploading a short video we shot at the event which will give you a better idea of what it looks like in action.

The noise you're hearing is actually from the fan itself, but MSI reassured us that this was only a prototype issue and that production fans should be quiet, due to different materials being used and a better manufacturing process being applied. This was of course far from the only thing on show and we've got pictures of a fair few other things to show you. First up we have a couple of pictures of MSI's EFI BIOS and it looks like a cracking way of access and changing all the BIOS options. Our Editor, Cameron Wilmot had a quick go as you can see from the picture below, although we weren't allowed to change any of the settings. 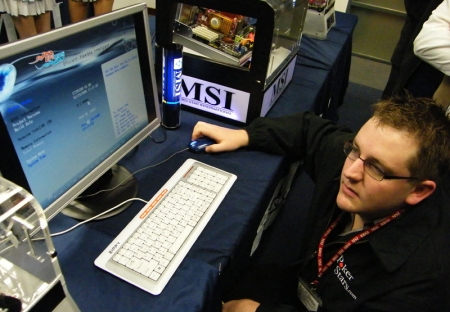 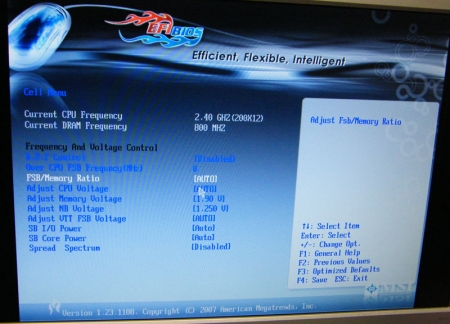 MSI was also showing off some other stuff, a new APC or Application PC, which in this case is a mini ITX motherboard inside a case which is suitable for things like digital signage which is a huge market these days and it has a massive growth. The problem so far has been expensive Industrial PC motherboards had to be used, bit this seems to be changing now with several companies making APC solutions. The difference is that there's no give year guaranteed supply of APC motherboards as it is with IPC products. The product below was using a GM965 motherboard and takes a suitable Intel CPU. 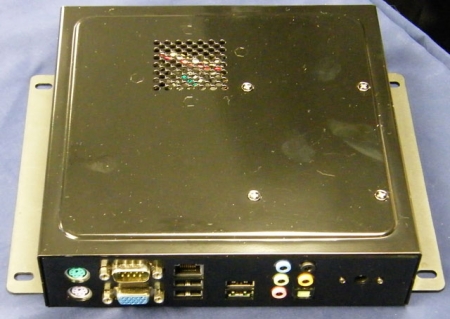 Next up we have a car PC concept, although it's unlikely that it will come inside the case used for the demo and the display would most likely be built into the dashboard on any card that it would be installed into. It has a built in GPS and a satnav system and it's powered by a 2GHz VIA C7D processor. The demo display was touch-sensitive and the system was running Windows XP. 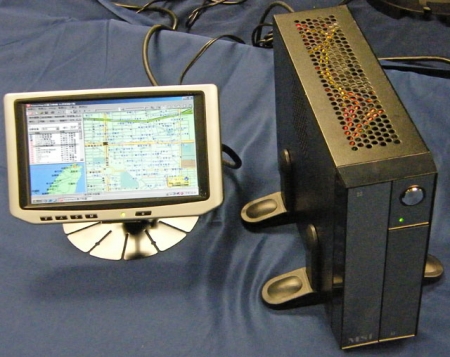 For those looking for a new server, maybe the new K1-105-A2M could be something out of interest. You're looking at support for dual AMD Opteron 2200/2300 processors and it's using the nForce Professional 3400 chipset. It can take up to 32GB of ECC DDR2 memory and it has a PCI slot as well as a x16 PCIe slot for expansion. Rather unusually for a server is the chipset heatpipe cooling. It should be quite an affordable 1U solution, although internal hard drive space is limited to only two SATA drivers. 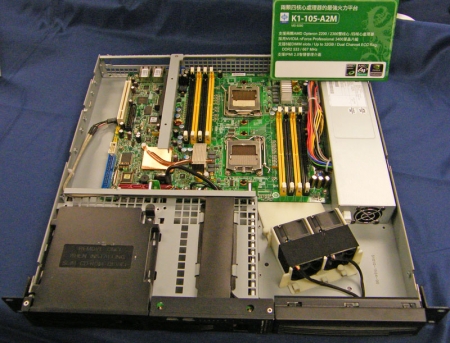 MSI also showed off a range of new notebooks, with the updated model of the GX600 getting a new feature which allows it to be not just overclocked, but also underclocked. By pressing the overclocking button when it's running on battery power, it will automatically underclock the CPU and dim the screen. MSI is intending to add this feature to a range of new notebooks in the future. 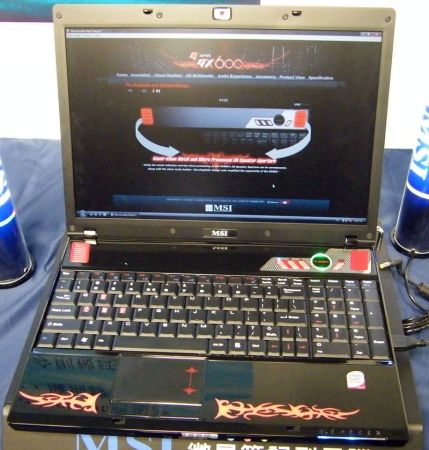 MSI had its upcoming 15 and 17-inch notebook designs on display as well, although the biggest news here is an aluminium lid and a new finish to the space above the keyboard where some of the shortcut keys and LED's are located. Both models featured HDMI output which is great to see, but we weren't given any additional information in terms of what the full specifications on these models will be.

One rather interesting development is MSI's PR620 notebook which emits anions or negatively charged ions. MSI claims that they're meant to improve the air around the notebook and kill of germs, something that has as yet to be scientifically proven. 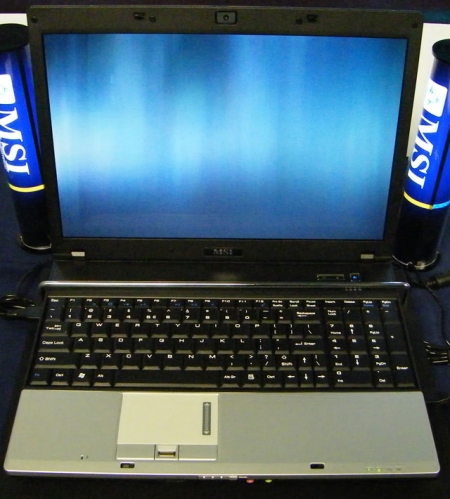 The one we really liked was still just a design study, which we think is a great shame, as the wood lid looked great, although in all fairness, we're not sure how long a pair of wood track pad buttons would last. There was also a purple/pink-ish leather coated version and one with carbon fibre, but the pictures didn't come out that great of these due to strange light conditions were they were displayed so apologies for not posting those pictures. 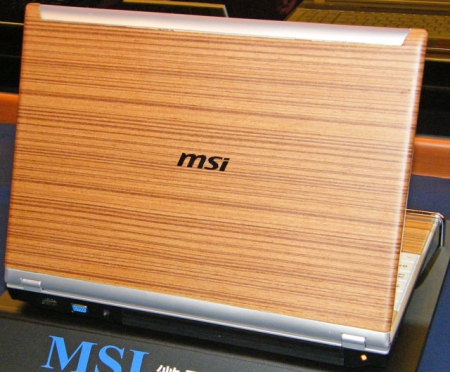 Finally we have something we didn't quite expect to see from MSI, although the company has already launched a notebook with it built in. It's a small portable ECG with a built in display and an SD card slot. It's meant to be carried by the patient for 24h so the doctor can monitor the patient's heart condition away from the hospital. These are apparently already being used in Taiwan and a couple of other countries and should tip up in the US in the not too distant future. MSI has a R&D division dedicated to these kind of medical devices as well as a robotics R&D team, although we have yet to see any products from them. 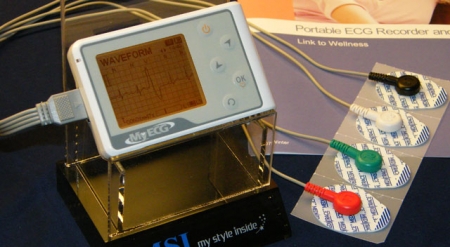 We'll try to follow up with MSI before Computex later this year, although we promise to try to bring you this in a more timely fashion than this ended up being as we got caught out a little bit with CeBIT happening a bit sooner than we expected. We have some more stuff coming up from Gigabyte and CyberLink, so stay tuned for more interesting news here at TweakTown.
Newsletter Subscription