All NewsBusiness, Financial & LegalCases, Cooling & PSUContests & GiveawaysCPU, APU & ChipsetsDealsDisplays & ProjectorsGamingMotherboardsScience, Space & RoboticsStorageVideo CardsVirtual & Augmented Reality
All ReviewsAll ArticlesAudio, Sound & SpeakersCases, Cooling & PSUCPUs, Chipsets & SoCsComputer SystemsDisplays & ProjectorsGamingMotherboardsNetworkingPeripheralsRAMStorageVideo Cards
GuidesGamingAsk the ExpertsNewsletterAboutForums
RTX 3090 TiRTX 4090Diablo 2GTA 6Halo InfiniteElon MuskRTX 3080HDMI 2.1
RAM
With CeBIT starting in Hannover, Germany on the 4th of March, TweakTown managed to do the rounds to a few of the companies in Taiwan before the show starts. We've got an exclusive look at some of the things which will be shown at the show and some that won't be at the show. We'll start this little roundup with Albatron, one of the slightly lesser well known companies in the market. First up we have a couple of graphics cards and although we saw a GeForce 9800 GX2, we can't post the pictures due to NDA restricitions.

First up is a new low profile GeForce 8600 GT card, which should offer some more horsepower than Albatrons Blue Ray decoder card (no, that's not a typo, it's what they call it). It does run hotter than the GeForce 8500 based Blue Ray decoder card, so sadly this card is using a dual slot cooling design. It has native DVI and HDMI connectors and it has a header for D-sub and TV-out on a separate bracket as well as S/PDIF input via a separate header.

Next up we have a picture of Albatron's custom single slot 9600 GT cooler, the fan has been moved to the forward half of the card and is larger than the one on the reference cards and should allow for better cooling than the reference cooler. 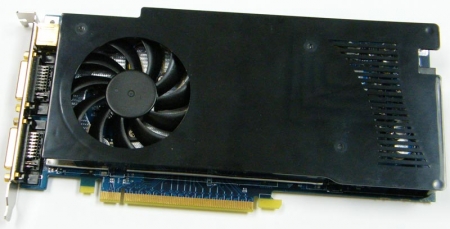 Next we have a couple of shots of Albatron's upcoming GME965 based mini ITX board, the PI965. This has to be one of the most feature packed mini ITX boards to date as Albatron has gone full on with this model. It has DVI, D-sub and component video outs at the rear, as well as a pair of Gigabit Ethernet connectors and 7.1-channel audio with optical S/PDIF out and four USB ports, as well as a pair of PS/2 ports. We told you about this board in October last year here, but it should finally be ready to hit the market after CeBIT. 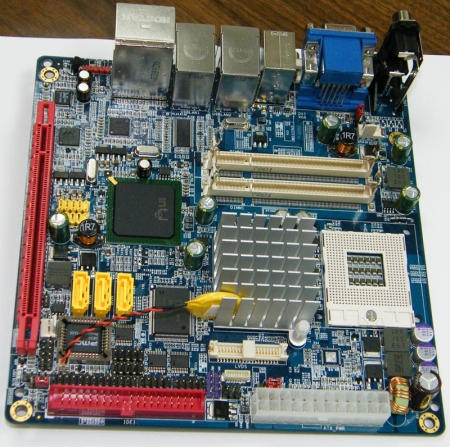 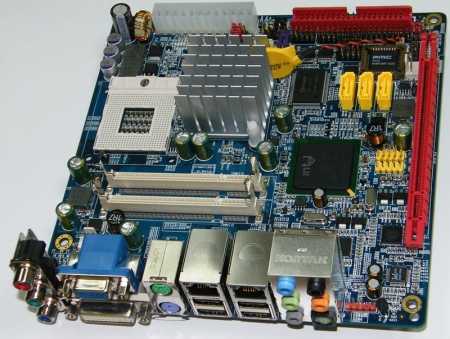 Finally we have a couple of pictures of a project from Albatron, although for now, this product is limited to the Brazilian market. It's a PC built into the back of a 17-inch LCD panel and although the specifications are a bit basic, the concept is great. Again, it's not the first time we've seen a PC built into the back of an LCD screen, but this is the first time we've seen it done without taking up any extra space. It seems like Asus was beaten by Albatron, as Asus has been talking about their Eee PC desktop system, which has yet to launch. 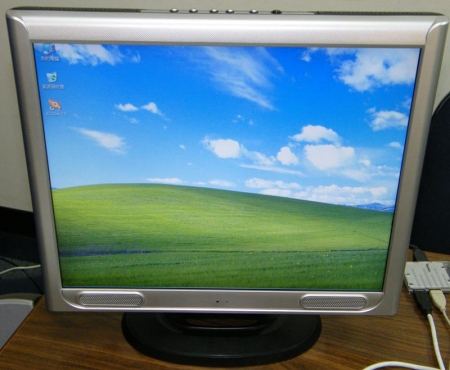 However, this is a slightly different beast, as it won't be as powerful, but it should also be more affordable. The CPU is a 500MHz AMD Geode LX 600 and as standard this is paired with 512MB of DDR 400 memory in an SO-DIMM slot. The specific system will most likely come with the OS installed on a Compact Flash card, although there is support for two SATA devices as well as up to two IDE devices. Furthermore there's a mini PCI slot for things such as a WiFi card and there's built in wired Gigabit Ethernet.

The rear of the system has a PS/2 port for the keyboard, a line out and microphone jack as well as two USB 1.1 ports. It will come with the OS pre-installed and there's no optical drive as standard. The 17-inch LCD is not widescreen and supports a maximum resolution of 1,024x768 according to the information we were given. It's far from a cutting edge PC, but if it's cheap enough, we're sure it'll find buyers.

You'll see more coverage over the next few days from MSI, Gigabyte and CyberLink, so stay tuned for more exclusives here at TweakTown.
Newsletter Subscription