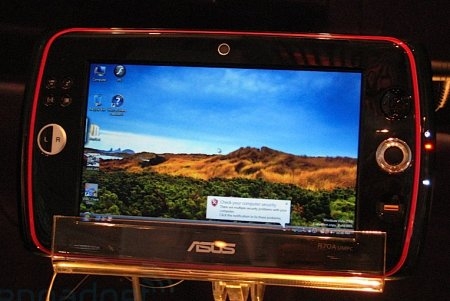 The folks over at Engadget managed to get an early look at the upcoming ASUS R70 Ultra Mobile PC (UMPC) with 7-inch screen. While only a big bad security guy was manning the booth, they suspect it is powered by an upcoming Intel processor (possibly Silverthorne) at 1.6GHz along with a 120GB hard drive and Windows Vista.

On the outside it has two USB jacks, memory card slot, kick-stand for watching videos as well as controls similar to the previous 5-inch R50a UMPC. Since at the ASUS booth it was mounted in a car, it would suggest that it either has GPS built-in or it is at least an option.

Check out the photo gallery for more.