SpaceX, Tesla and Twitter CEO Elon Musk made a surprise guest appearance at one of Dave Chappelle's comedy shows on Sunday night and was met with large portions of the crowd booing him.

Musk made an appearance at Dave Chappelle's comedy show in San Francisco, the same city that hosts Twitter HQ. Chappelle introduced Musk as the richest man alive. Musk was met with large portions of the crowd booing him, which even eventuated in Musk asking Chappelle what he should do next. Chappelle attempted to make light of the situation by saying that it sounded like many of the former Twitter staff that Musk fired "are in the audience".

Chappelle went on to defend Musk by asking the crowd to stop booing his guest, saying that "there is something better you could do" and "booing isn't the best thing you can do". Musk replied to a Twitter comment after the event that mentioned the booing he received at Chappelle's show, Musk wrote, "Technically, it was 90% cheers & 10% boos (except during quiet periods), but, still, that's a lot of boos, which is a first for me in real life (frequent on Twitter). It's almost as if I've offended SF's unhinged leftists ... but nahhh."

Musk has since deleted that tweet from his account, which could be viewed as an admission that it wasn't 90% cheers coming from the crowd that there was more than 10% of people booing. Musk deleting his tweet, and writing that receiving that many boos is "a first for me in real life", may speak to the divisive character he is turning into since the Twitter acquisition and the rollercoaster that has taken place following it. 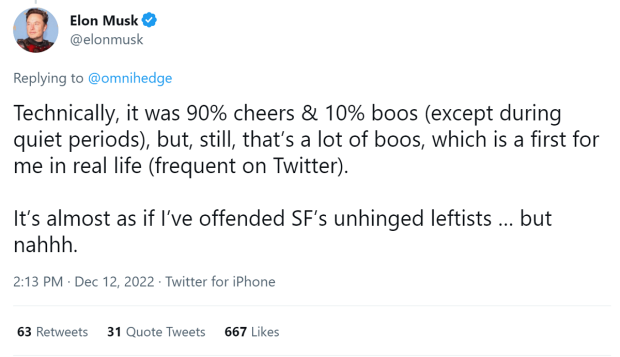 In other Elon Musk-related news, NASA has expressed concern over the potential distraction Twitter will cause, which may affect SpaceX timelines.

In a recent meeting, NASA Administrator Bill Nelson discussed SpaceX's plans with the company's President and Chief Operating Officer, Gwynne Shotwell. Shotwell, who has been with SpaceX since its founding in 2002, is responsible for overseeing the company's daily operations and works closely with CEO Elon Musk to develop long-term strategies.

Nelson expressed concern about Musk's recent increased presence on Twitter and asked Shotwell if it would impact SpaceX's plans. Shotwell reassured Nelson, stating that there was no cause for concern. According to Nelson's recount of the conversation, Shotwell said, "I assure you, it is not. You have nothing to worry about." If you are interested in reading more about that story, check out the below link. 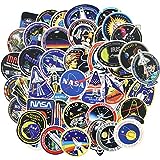