Halloween has just passed, and NASA is the celebratory spirit by releasing a new image on the Hubble Space Telescope Twitter account. 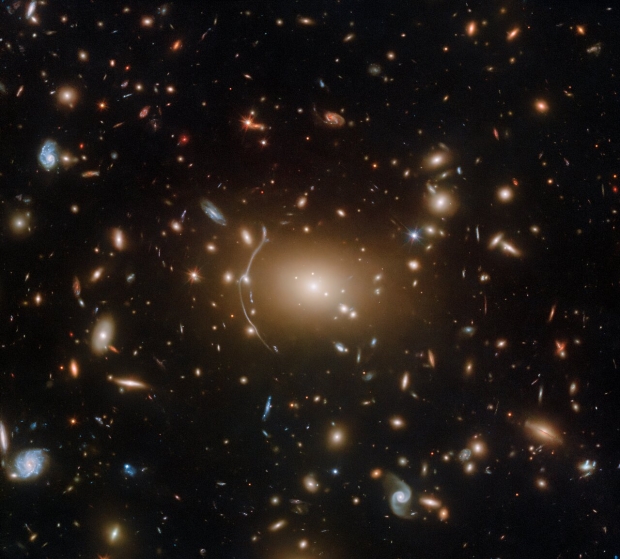 The image was released on October 27 and showcased the galaxy cluster known as Abell 611, located approximately 3.2 billion light-years from Earth. The European Space Agency (ESA) explains via its press release that Abell 611 is a cobweb of galaxies that are held together by a dark secret that is still giving astronomers headaches, dark matter. According to the press release, the galaxy cluster doesn't appear to have enough matter present to stop all of the rapidly rotating galaxies from eventually flying apart from each other. However, this isn't what's happening, as researchers have observed the opposite.

Abell 611 isn't unique in this head-scratching regard, as astronomers have observed the same problem with other massive cosmic structures such as galaxies and galaxy clusters. The ESA writes that this problem only presents itself on large-scale cosmic objects, and typically isn't present on the smaller scale, such as calculating the orbit of planets around the Sun or explaining the Solar System as a whole. The same works for other star systems as well. However, when attempting to find out the mass of larger objects such as galaxies or galaxy clusters, the calculations fall apart.

One theory is dark matter, which scientists are yet to fully get their heads around and totally agree upon. The ESA writes that the "dark" in the name refers to the fact that there is an unknown amount of this matter in the universe and that it doesn't interact with light the same way observable matter does.

The ESA further explains that most explanations for this mystery fall into two categories; some kind of subatomic particle that is present in large quantities across the universe that has yet to be successfully measured or an extremely large object that is present across the cosmos that doesn't interact with light in a way that current-level telescopes can observe.

As this mystery is continued to be worked on by astronomers around the world, the puzzling nature and origin of dark matter remains undefinable. For now.