Konami's new Silent Hill 2 remake will be kept off of Xbox and Nintendo platforms for at least 12 months, Sony has confirmed. 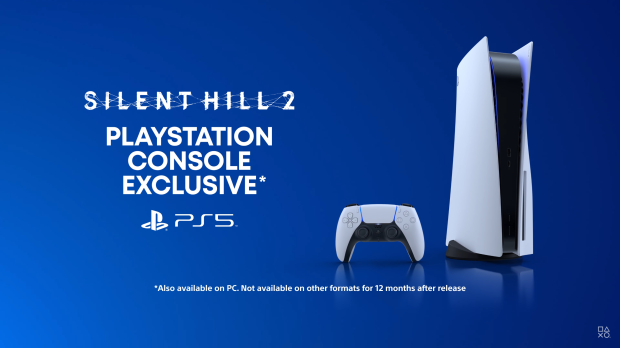 Silent Hill is coming back, but not for everyone. Sony has acquired timed exclusivity on the newly announced Silent Hill 2 remake for one year. The remake is releasing on PC, but it won't be available on non-PlayStation consoles for at least 12 months.

"Also available on PC. Not available on other formats for 12 months after release," reads a footnote at the bottom of the official Silent Hill 2 trailer.

This exclusivity deal comes at an interesting time for Sony, who is fiercely opposing the Microsoft-Activision merger due to Call of Duty's potential exclusivity on Xbox platforms.

We had previously reported the game would be a hard exclusive on PlayStation 5, but that is no longer the case. This was certainly the messaging that Konami presented in its official Silent Hill announcement.

The Silent Hill 2 remake is being developed by Polish horror game dev Bloober Team, and will make use of many of the PlayStation 5's optimizations including its Tempest 3D audio tech, as well as utilizing the DualSense's haptic feedback.

It's not only graphics, though. A lot of Silent Hill's disturbing atmosphere comes from music and sound design. Thanks to PS5's 3D audio capabilities, players will be able to determine the exact direction where the sound is coming from. The WWise sound engine creates a realistic and believable soundscape that helps players feel like they are truly inside the game.

Of course, we are not forgetting about the DualSense controller. We've already shown with our previous title, The Medium, that we can get pretty creative when it comes to haptic feedback and adaptive triggers. We're bringing even more new ideas for Silent Hill 2, but let's keep a surprise for now.