CD Projekt RED is letting an external development team work on a new Witcher RPG so that it can focus on new projects. 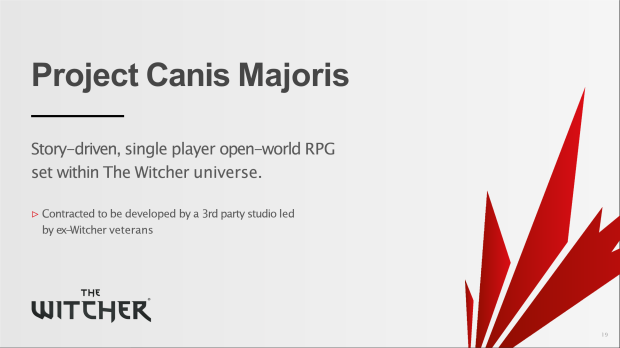 CD Projekt is working on a ton of new games. The studio announced a new Witcher trilogy codenamed Polaris that is set to release across a six-year span, as well as a fully-fledged sequel to Cyberpunk 2077 that should have multiplayer. There's actually five Witcher projects in development, but CD Projekt is only involved in four of them.

Following major tech and IP expansion, CD Projekt is handing off the development of one of its new Witcher games to another developer. The game is codenamed Canis Majoris (which roughly translates to "big dog") and is described as a story-driven, singleplayer open-world RPG.

The game is being developed by a third-party studio that is led by experienced Witcher developers who worked on past games in the series.

"For the first time in our history we are opening up to working with external development teams to create new games in our franchises. We aim to work with experienced partners who will do justice to our brands," said CD Projekt business executive Michal Nowakowski.

"We are already working with a completely external team and we have a few carefully selected more in the years to come."