All NewsBusiness, Financial & LegalCases, Cooling & PSUContests & GiveawaysCPU, APU & ChipsetsDealsDisplays & ProjectorsGamingMotherboardsScience, Space & RoboticsStorageVideo CardsVirtual & Augmented Reality
All ReviewsAll ArticlesAudio, Sound & SpeakersCases, Cooling & PSUCPUs, Chipsets & SoCsComputer SystemsDisplays & ProjectorsGamingMotherboardsNetworkingPeripheralsRAMStorageVideo Cards
GuidesGamingAsk the ExpertsNewsletterAboutForums
RTX 3090 TiRTX 4090Diablo 2GTA 6Halo InfiniteElon MuskRTX 3080HDMI 2.1
Continuing the Gigabyte update, we've got some motherboards for you and we promise there won't be a lot of talk about DES this time, even though it's a key feature for Gigabyte this time. Only one of the three boards we are going to show you today has anything to do with DES. Although this might not be the most exciting product of the three, it's yet another X48 board, this time the GA-X48-DS5. This isn't quite the final version of the board, as Gigabyte will add a second Ethernet controller to the final revision. This will be a slightly cheaper board with the X48 chipset than the DQ6 series, although with Gigabyte moving the DS5 and now also the DS4 series of boards to become something more of an overclocking platform, it will be interesting to see how they diversify their product range. 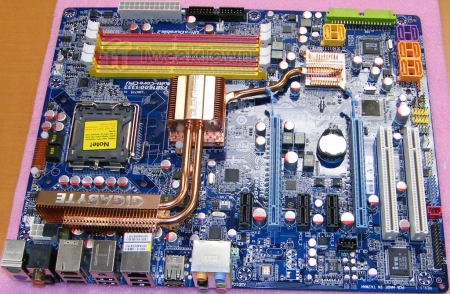 As you can see from the picture above, this board isn't that different to the DQ6 series and in all honesty we're not quite sure what the difference will be to the final DQ6. The bundle will most likely be different, but as we haven't seen either in a retail package as yet, we couldn't really tell you. This board should have similar features to the current X38-DQ6 board by the looks of it apart from support for higher FSBs and memory speeds. This is still a DDR2 part, as the T models from Gigabyte are the ones with DDR3 support. We actually asked Gigabyte what the T in the model name stands for as we couldn't quite figure out what it had to do with DDR3, well; T stands for Three if you wondered.

Next up we have the first pictures of Gigabyte's RS780 mATX board, the MA78GM-S2H. This board looks like it will pack a punch when it arrives sometime in March. Gigabyte seems to have packed in just about every single feature you can imagine on this tiny board. It has support for HDMI, DVI and D-sub video output and it offers 7.1-channel sound with optical S/PDIF out. It also has four rear USB 2.0 ports with header for a further eight ports, one rear FireWire connector and a header for a further connector, eSATA and finally Gigabit Ethernet. Not bad for such a small board, but it also has five internal SATA connectors, four memory slots, a single x16 PCIe slot, a x1 PCIe slot and two PCI slots. 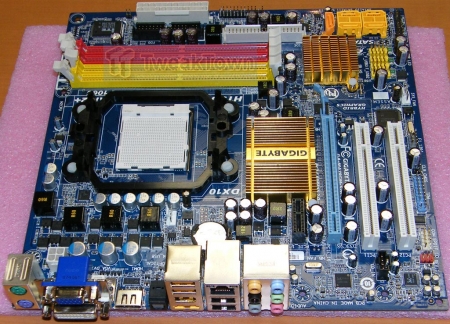 As you can see from the picture, the RS780 chipset is running very cool as it only needs a tiny passive heatsink to cool it. This board should also feature AMD's upcoming SB700 southbridge and it's the first board from Gigabyte to feature Hybrid CrossFire support and it's also the first mATX board from Gigabyte that supports the full AM2+ specification.

A couple of shortcomings include the lack of the extra 64MB of 32-bit DDR2 graphics memory that the RS780 chipset supports, but hopefully Gigabyte will launch a model with this at a later stage, as early benchmarks indicate that this makes a huge difference to the cards 3D performance. We'd also like to see a DS2 version of this board will all solid capacitors, as HTPCs tend to get quite hot due to where they are placed, so the extended heat tolerance and component life of solid capacitors would be an advantage here.

Finally we have another AMD AM2+ board, this time with the upcoming GeForce 8200 chipset from Nvidia, which is also known as the M78 and more specifically in this case, the M78S. This is the mid-range model in the new chipset lineup from Nvidia and Gigabyte told us that at least for now, they won't be doing a motherboard based on the M78U due to the fact that the chipset runs too hot and needs active cooling, something they don't see as a fit for the market where they're targeting these products. The board in question that we saw is the M78SM-S2H and as the previous board, this is also a mATX board. 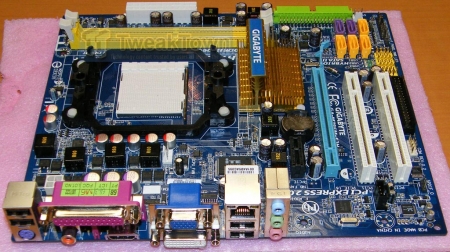 What we have here is something fairly similar to the RS780 based board, although it's a simpler model due to the mid-range chipset. Around the back you'll still find HDMI, DVI and D-sub connectors, but this board only has 5.1-channel sound and coaxial S/PDIF out. For some reason Gigabyte fitted a parallel port to this board and removed the PS/2 port for the mouse and replaced it with two USB 2.0 ports for a total of four USB 2.0 ports and finally there's a Gigabit Ethernet connector.

As you can see from the picture, this board features a much larger heatsink, as even the M78S runs hotter than the RS780 chipset. It only has two memory slots, but it should still offer support for dual channel memory due to the memory controller being integrated into the AMD CPU's. The slot configuration is the same as the previous board with one x16 PCIe, one x1 PCI and two PCI slots. As there's no eSATA connector on this board, you'll find six internal SATA connectors and there is also support for a further eight USB 2.0 ports via headers on the bord.

Gigabyte told us one interesting thing about the new Nvidia chipsets and HD audio from HD DVD and Blu-ray media, there are beta drivers in the works that will allow this chipset to support the latest HD audio formats such as DTS-HD and Dolby TrueHD, something that AMD doesn't support at this moment. However, it does require that you're using the latest version of CyberLink Power DVD with support for HD DVD and Blu-ray media.

Stay tuned for part 3 which will take a closer look at some new graphics card features coming from Gigabyte in the not too distant future.
Newsletter Subscription