What do you think about robots taking your order, cooking your food, and delivering food to you while you dine at a restaurant? There are some roles that are easily replaced with robots, while other positions should remain safe for human workers... for now. 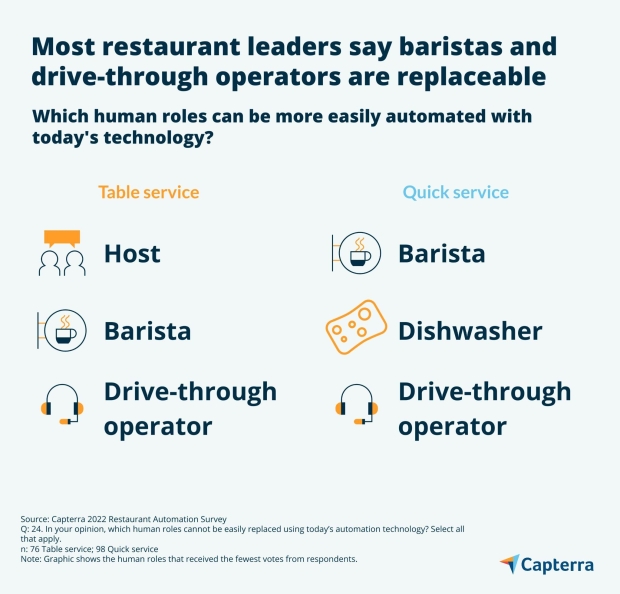 Currently, chef robots are extremely limited in their capable tasks, such as mixing beverages or operating deep fryers, so certain roles are likely safe. For example, chefs, managers, and waitstaff might be irreplaceable, but there definitely is room for automation and robotics to augment human staff in restaurants.

However, front-of-house jobs might be most likely to be disrupted by automation, with cashiers, drive-through operators, baristas, and hosts might be under pressure. Humans currently employed in these roles may one day have to expand their work skillset in the restaurant to avoid being replaced by their robot counterparts.

As noted by Molly Burke, senior retail analyst at Capterra, in a recent study focused on the restaurant industry - and how robotics can play a changing role.

"Our research shows that while not all human roles are ready to be replaced by robots just yet, restaurants can go ahead and introduce automation in a few key areas. Strategically incorporating automation could alleviate the labor crisis currently plaguing the restaurant industry."

Most restaurants already use some form of automation to help both staff and customers but using actual robotics to complete tasks is still on the rise. Tasks include things such as inventory management, food safety monitoring, food prep, employee management, and performance analytics - along with customer-focused services such as mobile ordering apps, online reservations, and digital loyalty programs.

Robots simply cannot replace every human role within a restaurant, as human touch for any responsibilities involving the flow of prepared food to customers. Robotic tech advancements should only accelerate from now, so human and robotic augmentation in the food service industry is going to occur whether workers are ready or not.