A brand new mineral has been discovered on the Moon by Chinese scientists, found inside samples of lunar material collected by the Chang'e 5 lunar probe in 2020. 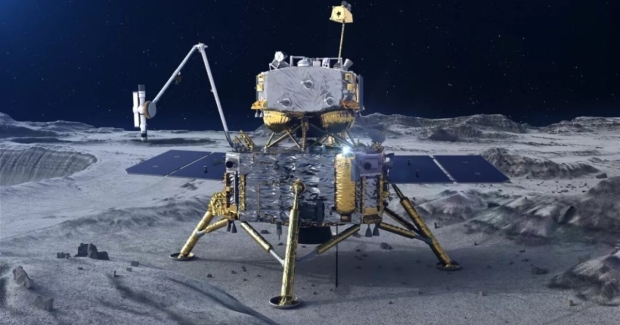 The name of the mineral was announced to be Changesite-(Y) by Dong Baotong, the vice chairman of the China Atomic Energy Authority, after its confirmation as a new mineral by the International Mineralogical Association's (IMA) Commission on New Minerals, Nomenclature and Classification (CNMNC). It is the sixth new mineral found on the Moon, making China the third country to have found one, following the United States and the former Soviet Union.

The mineral has been named Changesite-(Y) is named as such after the Chinese moon goddess Chang'e. It is a phosphate mineral that forms columnar crystals and was found inside lunar basalt particles or volcanic rock. A single crystal was isolated by Beijing Research Institute of Uranium Geology researchers, with a radius of 10 micrometers. Helium-3 was also found in the samples, which has potential as a fuel source for nuclear fusion.

The sample was one of 140,000 lunar sample particles collected by the Chang'e 5 mission, which totaled 1,731 grams (3.82 pounds), and marked the first lunar samples collected in over four decades. The new samples are estimated to be about one billion years younger than those collected by the U.S. and the former Soviet Union. This indicates why the nations may not have found Changesite-(Y) where they looked.

Chang'e 6 will be the next mission in the Chinese Lunar Exploration Program (CLEP), also known as the Chang'e Project, and will be the second sample return mission of the program. It is scheduled to launch in 2024 and bring lunar material back to Earth as its predecessor did.