A rocket flying for the latest mission of Jeff Bezos' space company Blue Origin failed and crashed shortly after lifting off on Monday, September 12th, 2022. 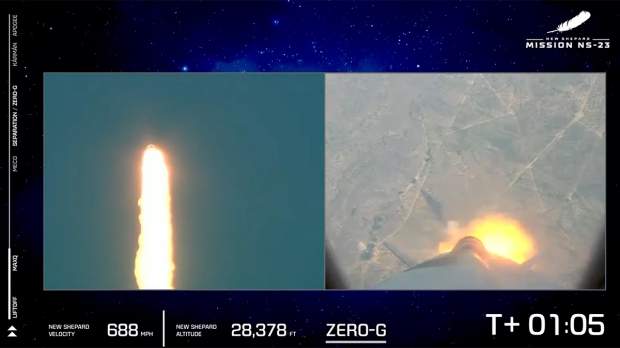 The New Shepard rocket flew for the NS-23 mission and carried no people on board, only an assortment of experiments. The capsule managed to safely separate from the failing rocket as its emergency launch abort system kicked in about a minute into the flight when flames engulfed the single engine at the bottom of the rocket. The capsule parachuted to the ground below in the desert minutes later, while the rocket crashed down.

The rocket used for the mission is the same that Blue Origin uses to take customers to the edge of space, the most recent flight being last month, bringing the total passenger count to 31 people. Following the incident, the Federal Aviation Administration (FAA) is grounding New Shepard rockets until it concludes an investigation into the event. No one was injured, and no damage was caused by the crashing rocket, and Blue Origin later took to Twitter to write, "Booster failure on today's uncrewed flight. Escape system performed as designed."

The rocket failed when it had reached speeds of almost 700 miles (1,126 kilometers) per hour and an altitude of roughly 28,000 feet (8,500 meters). The rocket failed around the point at which it experiences maximum pressure, referred to as max q. Footage of the rocket was not shown after it failed, with the livestream focusing on the capsule, which contained 36 experiments, mostly from students, that were supposed to experience a few minutes of weightlessness during the flight, and half of which were sponsored by NASA.