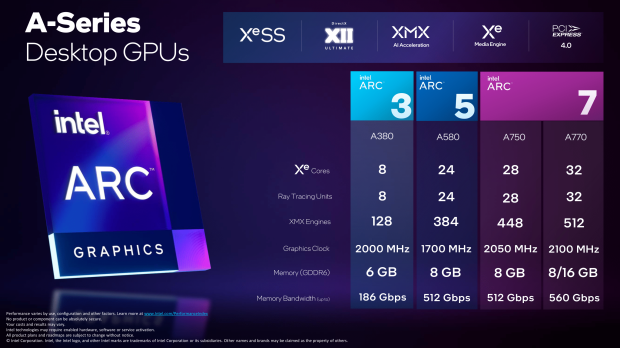 The new Intel Arc A7 graphics cards will arrive in two versions: A770 (which comes in two different SKUs) followed by the A750. Intel is making things easier with product numbering with its Core i3, Core i5, Core i7, and Core i9 processors and now has its upcoming Arc 3, Arc 5, and Arc 7 graphics cards. 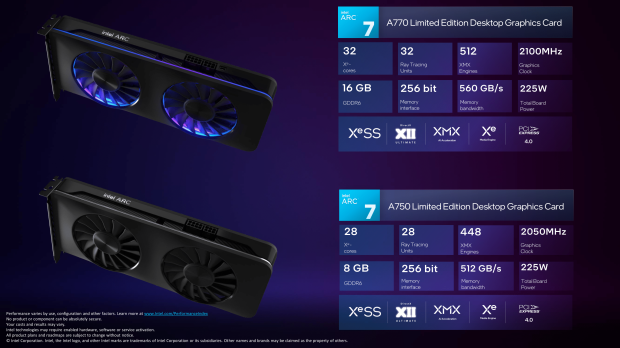 Intel notes on its website for the Arc GPU details that the Intel-branded card (IBC) which is something new (for me at least) with Intel's in-house Arc A770 Limited Edition graphics card is the only one that ships with 16GB GDDR6. The AIB partner Arc A770 graphics cards will only have 8GB of GDDR6 memory.

Intel is using an 8+6-pin PCIe power connector configuration on the Intel Arc A770 and Arc A750 Limited Edition graphics cards, with both of them supporting Intel's AI upscaling technology and AMD FSR and NVIDIA DLSS competitor -- XeSS. DirectX 12 Ultimate, ray tracing support, PCIe 4.0 x16 connectivity, and more are here with the Arc A-Series desktop GPUs.

Intel says that "as we march closer toward the availability for all of these cards" the company will share "more information" with us. We have most of what we need to know, but now we need to know pricing... launch dates... availability.