EA is wanting to chew up more of your precious SSD space with its upcoming NBA 2K23 commanding a huge 152GB on the Xbox Series X/S pre-loads of the game. 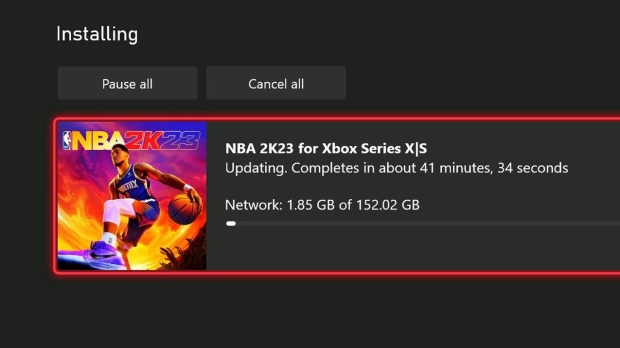 2K Sports has unleashed pre-loading for NBA 2K23 on Microsoft's current-gen Xbox Series X/S consoles, with the pre-load taking up a huge 152GB of SSD space on the console. This is a rather alarming upgrade of 35GB from last year's NBA 2K22, so I do wonder where all that extra 35GB is being used as it's a massive chunk of storage for a single basketball game.

NBA 2K23 would be taking up one-sixth of the 1TB of SSD storage inside of Microsoft's current-gen Xbox Series X/S consoles, which is kinda ridiculous considering it's just a basketball game and not some next-gen Crysis-style AAA title on a next-gen Unreal Engine 5 visual masterpiece. But the 35GB increase in storage required over NBA 2K22 is absolutely ridiculous, 152GB in total for a basketball game is just bonkers.

We are looking at a still-huge 142GB download for NBA 2K23 on the PlayStation 5, while it weighs 110GB on the PC. If you're using a last-gen PlayStation 4 console then you'll only have to reserve 47GB for NBA 2K23. Those near 100GB of additional bits and bytes of data must be real pretty, eh?