Paleontologists have uncovered the fossilized remains of a massive dinosaur in Portugal, potentially the largest dinosaur fossil found in Europe, if not the entire world. 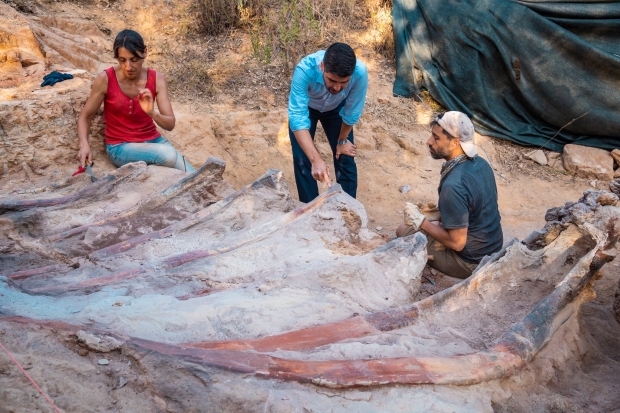 The ribs pictured each measure about 3 meters (9.8 feet) long and are thought to be from a sauropod. The remains were found in the garden of a house near Pombal, Portugal after the owner of the house first started finding remains in his garden while digging to clear the way for an extension in 2017. The homeowner contacted paleontologists after his discovery, and Portuguese and Spanish paleontologists have since uncovered the ribs and other bones from the sauropod starting in August 2022.

"It's one of the biggest specimens discovered in Europe, perhaps in the world," paleontologist Elisabete Malafaia, from the Faculty of Sciences at Lisbon University, told Agence France-Presse (AFP) on Monday.

Sauropods were herbivorous dinosaurs standing roughly 12 meters (39 feet) tall and 25 meters (82 feet) long when they roamed the Earth approximately 150 million years ago. Specifically, this specimen is thought to be a brachiosaurid and believed to have lived during the Upper Jurassic period. Sauropods like the brachiosaurid are known for their long necks and tails, which put them amongst the largest animals that have ever lived.

According to Malafaia, the discovery of both the dinosaur's ribs and vertebrae in the same location and in the same relative position to each other as they would be in the living dinosaur is "relatively rare." Further digs are expected at the site and in the surrounding areas to find more pieces of the brachiosaurid and potentially other fossils.