Fast food chains are certainly interested in providing customers with as much food as they can while keeping costs down and one way to do that is to automate the process.

Automating the process of food construction can come in various ways, and one new way that has recently gone viral on TikTok is a robot designed to make hot dogs for paying customers, allowing the restaurant chain to keep selling products without any employee present. The above video showcases a robot named Robbie, which was built for a paid partnership between robotics company VeloxAlpha and Poland's largest convenience chain, Zabka Polska.

Robbie has been rolled out to several Zabka Polska locations across Poland, with officials from VeloxAlpha claiming that Robbie is the "first of its kind of the market" that aims to create a "user-friendly" system that will be "available 24-7 for everyone". However, there seem to be some apparent issues with Robbie's technique, as the above video shows the robot failing completely at preparing a hotdog for a customer. The video has since been viewed more than 12 million times, with some TikTok users commenting, "it's his first day on the job" and "it ain't much, but it's honest work".

There is no doubt that fast food chains will eventually implement some degree of robotic automation in their stores as it would free up revenue that they would otherwise be using to human-pay employees. Additionally, many fast food chains would be able to stay open for much longer. However, judging by Robbie's performance in this video, it seems that reality may be several years away, or at least when it comes to making a successful hot dog.

On a more humorous note, Robbie reminds me of the small robot that Rick from Rick and Morty constructs to pass him the butter.

In other news, a Stanford Professor has warned that a massive UFO disclosure is around the corner and that the government is currently involved in an active coverup of UFO debris. The professor claims that he has spoken to individuals that worked on recovering UFO debris and that they will all be coming forward soon. 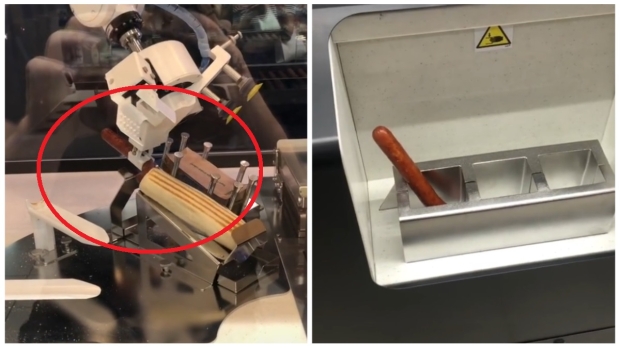