The new ASUS ROG Swift OLED PG48UQ and PG42UQ gaming monitors have a new champion in their ranks: a beautiful new OLED panel. This means that you have all the benefits of OLED display technology: per pixel dimming, eye-melting contrast ratios that allow for true HDR gaming, and twitch-fast 0.1ms response time.

Not only that, but you've got the glorious native 4K resolution and 120Hz refresh rate, but it wouldn't be a new ASUS ROG gaming monitor without overclocking. So yes, the new ROG Swift OLED PG48UQ and PG42UQ gaming monitors can be overclocked to 4K 138Hz, which should look absolutely gorgeous with its OLED panel, and be buttery smooth at 138Hz. 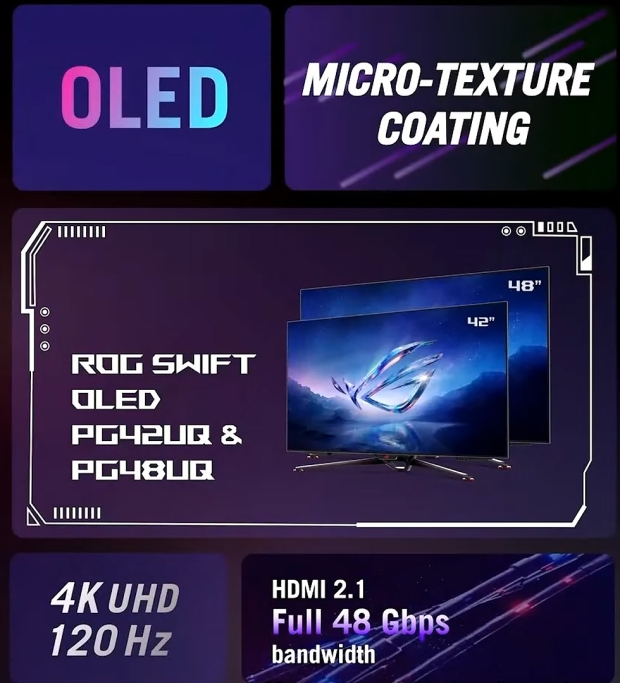 My daily driver for the last 18 months has been a 77-inch 4K 120Hz OLED TV, and it has been utterly fantastic. Going down to any LCD or LED monitor pales in comparison to an OLED panel at 4K 120Hz, they're truly one of the best upgrades you can do to your PC. Even if it's for workstation use, an OLED panel is an utter dream on your eyes. For gamers... well, 4K 120Hz+ on an OLED panel is something you need to see, in order to believe.

The difference here with the OLED gaming monitors from ASUS, is that the ROG Swift OLED PG48UQ and PG42UQ gaming monitors will turn off when you shut down your PC, something that the bigger OLED TVs don't do. 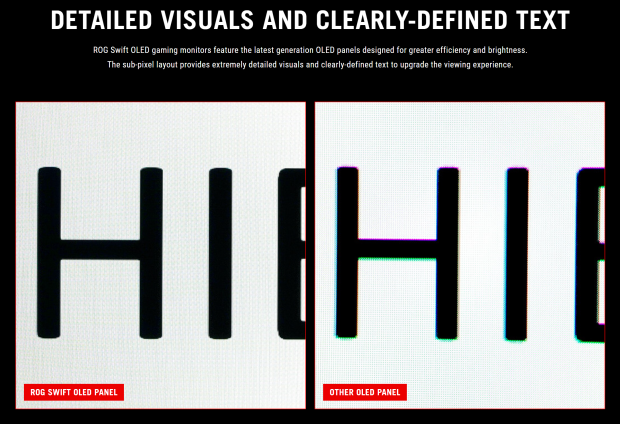 There are also more designed-for-PC features that ASUS is wiring into the ROG Swift OLED PG48UQ and PG42UQ gaming monitors, with ASUS using an anti-glare coating that should make for rooms that have oodles of light pouring into them during the day.

ASUS even provides a tripod socket on the top of the new ROG Swift OLED gaming monitors, so you can throw your camera above your monitor for work meetings, or if you're streaming your games online. There's also DisplayPort 1.4 with Display Stream Compression (DSC), HDMI 2.1 and HDMI 2.0 ports, and a USB hub.

Once again, ASUS being ASUS with its ROG gaming products... there is a custom heat sink inside of the ROG Swift OLED PG48UQ gaming monitor that provides more surface area for heat exchange, thus improving cooling performance for those all-day, or all-night gaming sessions. 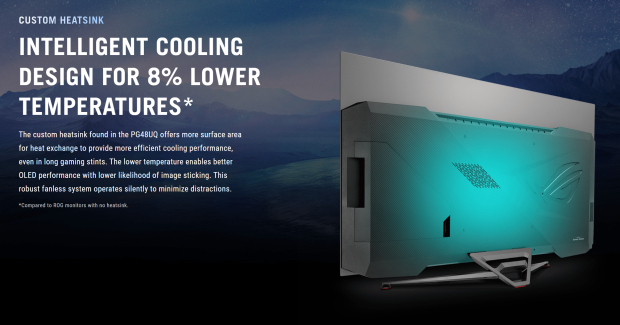 ASUS says that the lowered temperatures enable better OLED performance, with a lower likelihood of image sticking. The robust fanless system also operates silently, which is a far cry from the active fans on the first 4K 120Hz gaming monitors.