Intel has detailed a little more information on its next-gen CPU packaging technology, shifting some of the dust across the rumors, and more at Hot Chips 34. 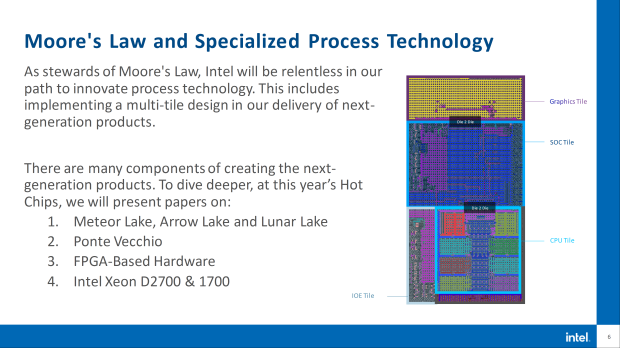 Intel showed off a new chip layout for its Meteor Lake platform, with a great look at tiles (or chiplets) including the quad-tile layout: CPU Tile, GPU Tile, SoC Tile, and the IOE tile. Intel confirmed that the CPU Tile would be made on the "Intel 4" process node or 7nm EUV process node, while the SoC Tile and IOE Tiles will be made by TSMC on their 6nm process node (N6).

As for the GPU Tile, Intel Meteor Lake GPUs were rumored for TSMC's upcoming 3nm process node, but due to some issues with that, Intel decided to use TSMC's new 5nm process node instead. Industry sources have said that it was the plan all along: for Intel's GPU Tile on their Meteor Lake CPUs to be on the TSMC 5nm process node.

Intel teased a mobile-focused Meteor Lake CPU layout, with the Intel Meteor Lake-P (6+8) CPU chip layout which you can see below: 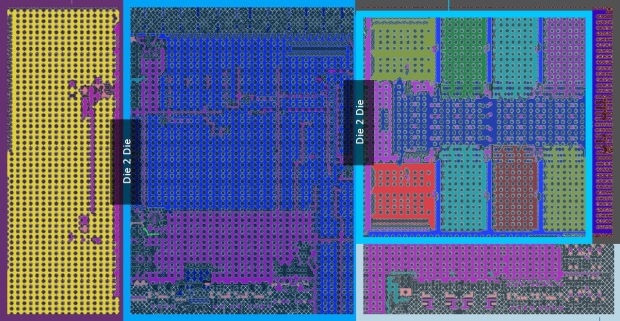 The new diagram shows off a next-gen consumer SoC with 6 Performance cores and 8 Efficient cores, with the compute tile manufactured in-house by Intel on their "Intel 4" process technology, which was previously known as Intel 7. We should expect the new Meteor Lake-P processors inside of 2023 low-power and gaming laptops.

Now we know that the GPU Tile on the upcoming Intel 14th Gen Core "Meteor Lake" CPUs to be made on TSMC's 5nm process node, not TSMC 3nm like we've heard previously.