A new suite of tests by Swedish car magazine Vi Bilägare has pitted an older car with physical controls across its dashboard with more modern cars that utilize touchscreens to assess safety and usability.

The Swedish magazine put the HMI (Human-Machine Interface) systems of twelve cars to the test, attempting to complete four simple tasks as quickly as possible. This included: turning on the driver's heated seat and increasing its temperature by two degrees and starting the defroster, turning on the radio and adjusting to a pre-determined station, resetting the trip computer, and lowering instrument lighting to its lowest level and turning off the center display.

The older car with solely buttons and switches for operating such features was a 2005 Volvo V70, while the remaining eleven cars were all modern, including the Tesla Model 3 and the Chinese electric vehicle, the MG Marvel R. In the Volvo V70, a driver was able to complete all tasks within 10 seconds flat, while at the other end of the scale, the same tasks took 44.9 seconds in the MG Marvel R.

The Volvo C40 and Dacia Sandero required 13.7 and 13.9 seconds, respectively, as their touchscreens were relatively uncomplicated or overloaded with features compared to other manufacturers' offerings. All tests were completed while the vehicles were being driven at 110 kilometers (68.4 miles) per hour, meaning the minimum distance traveled during the test was the Volvo V70's 306 meters (1,004 feet), compared to the maximum distance of 1,372 meters (4,501 feet) covered by the MG Marvel R.

You can see the results of Vi Bilägare's tests here. 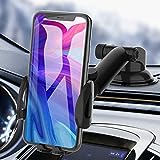