We heard more details on AMD's upcoming RDNA 3-based Navi 3X GPUs last week: including the Navi 31, Navi 32, and Navi 33 GPUs, and a month ago we saw some fan-made renders... but now we have some updated renders, with the very latest rumored specs on the new Navi 3X GPUs.

The new renders are from Twitter user "Wild_C" who made some new renders of the Navi 31, Navi 32, and Navi 33 GPUs after his original renders a few weeks ago. The updated die sizes are interesting to note, while some more details on the GPUs themselves (GPU specs + memory + memory bus) are provided by 3DCenter.org.

AMD's new Navi 31 GPU is looking dapper in the render, with a die size of 533 mm², that's including 308 mm² GCD (Graphics Die) and six 37.5 mm² MCDs (Memory Dies). This is up from the previous specs, where it was estimated that Navi 31 would have a die size of 633mm². Some of these specs are "pure speculation" just to note, so don't get your hopes up too much... still, it's exciting to see. 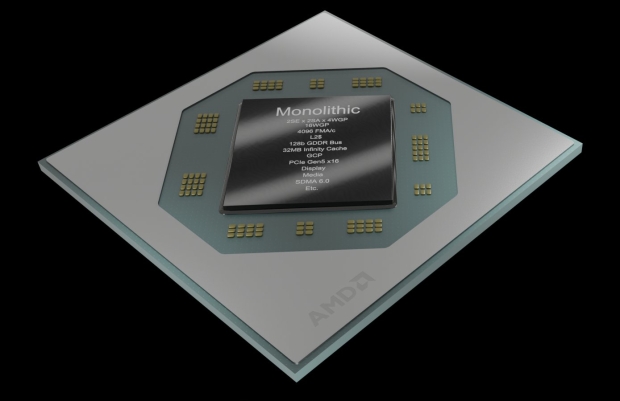 We should expect AMD to debut the monster Navi 31 GPU inside of a flagship Radeon RX 7900 XT (if they continue their naming scheme) later this year, with Navi 31 packing 12288 GPU cores, PCIe 5.0 x16 support, and 6 x MCDs that seems to be enough to have NVIDIA shaking in their GeForce RTX boots.

AMD isn't a stranger to getting VRAM as close to the GPU as possible, with both Fiji and Vega both rocking HBM and HBM2, respectively. AMD isn't using HBM this time around, replacing it with GDDR6 at very high speeds, and placing it directly next to the GCD. Up to 24GB of GDDR6 memory is expected: a large upgrade from the 16GB GDDR6 used on the Radeon RX 6950 XT and Radeon RX 6900 XT.