I wouldn't want to be on the Intel GPU marketing team right now, or anywhere at Intel for that matter as it seems to be filled with issues... but the Intel Arc GPUs have been an utter disaster, and no matter how much sticky tape that Intel puts on it, it's not going to be good.

Intel could be saying one thing about Arc internally, and externally... we don't know, but it sounds like that is happening. Intel GPU marketing is a mess right now, with them out there being confident -- sending Ryan Shrout and Tom Peterson out to YouTubers -- meanwhile, it's a dumpster fire around them. 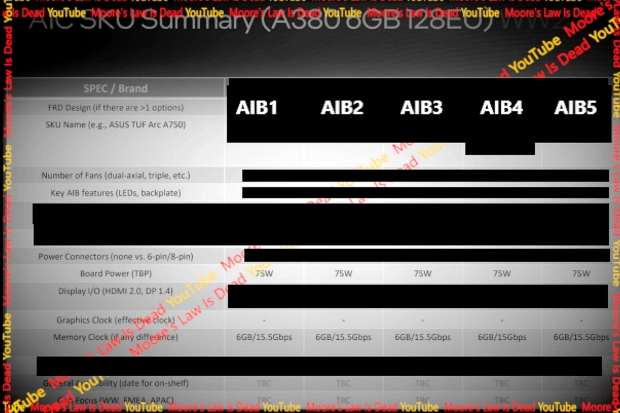 According to the leaked internal slides, the Intel graphics division saw these slides a month ago, where we have details on SKUs, and so much more. We know that AIC (add-in card) launches were pegged for early August, where if Intel wasn't experiencing major issues with its Arc GPU launch, would be hitting system integrators and AIBs right... well, right now.

Sure, we've seen the custom Arc A380 graphics cards from GUNNIR and ASRock, but we should also see other AIBs like ASUS, GIGABYTE, and most likely MSI. We can see the AIBs on there, but they've been blacked out for obvious reasons. 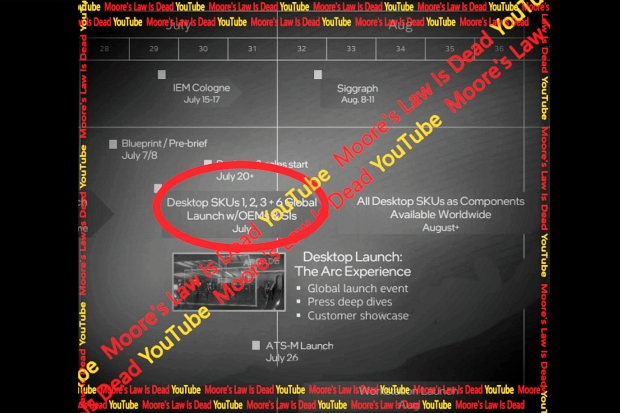 Another slide talks about something else Intel had planned: the "Desktop Launch: The Arc Experience" which was meant to be a global launch event for the desktop Intel Arc Alchemist graphics card family. The slide also mentions that by the halfway mark of August, we'd have "all desktop SKUs" of Intel Arc Alchemist desktop graphics cards "available worldwide". Oops.