A team of researchers has captured insane footage of a rare sea creature living at the extreme depth of nearly 10,000 feet.

The team of researchers called Nautilus Live has taken to their YouTube channel to share footage of an expedition down to the unexplored seamount north of Johnston Atoll in the Pacific Ocean. During the expedition, the researchers observed and captured glorious footage of a rare sea creature known as a Solumbellula Sea Pen. The observation marked the first time the sea creature has been spotted in the pacific ocean.

Notably, the Solumbellula Sea Pen is about 15 inches from its 6.5-foot-long stalk. The tentacles seen attached to the creature are for gathering food particles that have floated down to the depths from above, and from the video, you can hear the researchers gasping at their discovery, with one researcher saying that "My mind is blown right now." The researchers speculated on the creature's age and estimated that it would be anywhere between seven to ten years old. 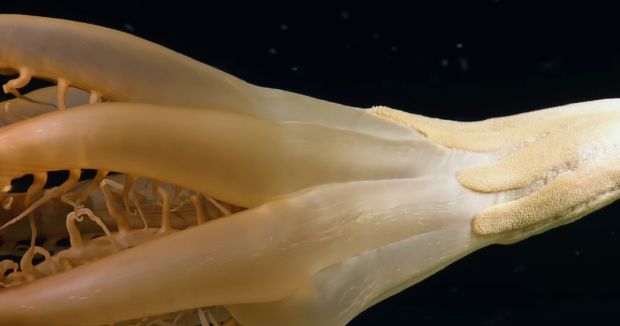