Residents in Indiana and other states noticed the sky turn a strange blue color on July 23, and now we know why.

A video uploaded to the American Meteor Society (AMS) shows a somewhat large meteoroid entering Earth's atmosphere at high speeds and bursting into flames as it soared across the night sky. The event was recorded by the AMS, and according to its website, the fireball was spotted by 155 people across multiple states such as Kentucky, Missouri, Iowa, Wisconsin, Michigan, and more.

So, why did the meteoroid cause the sky to turn into a blue color? When a meteoroid enters Earth's atmosphere, it experiences a high level of friction with Earth's dense atmosphere. This friction is increased as the meteor gets closer to Earth's surface, and as a result, the meteor catches fire - turning into a fireball. The brightness of the meteor is determined by the speed and size of the space debris.

As explained perfectly by The Conversation, "The kinetic energy an object carries is proportional to its mass multiplied by its velocity squared, meaning that minuscule grains moving really fast carry vast amounts of energy. That energy is converted to light, which is what we see when a meteor flashes in the night sky." 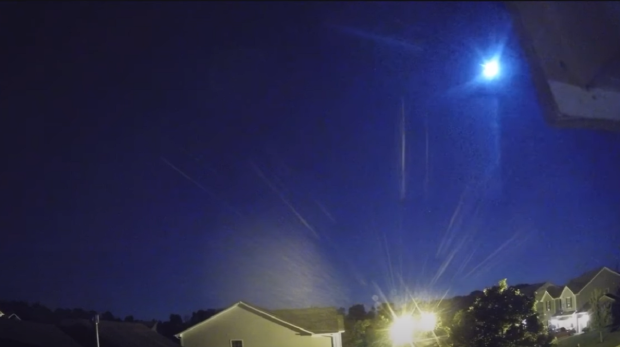