A study on the launcher titled "An Explosively Driven Launcher Capable of 10 km/s Projectile Velocities" has been accepted for publication into the journal Shock Waves. 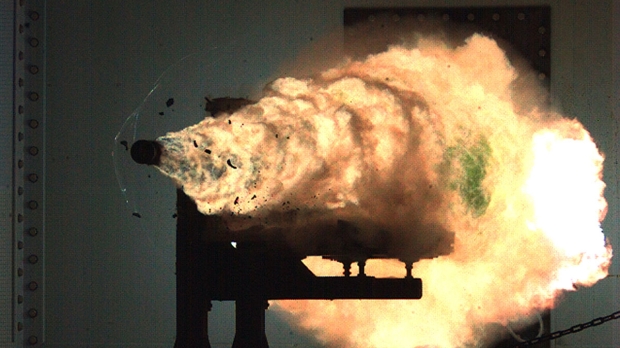 Engineers from McGill University and the Royal Military College of Canada (RMC) have created what they call the Implosion-Driven Launcher (IDL), capable of firing magnesium projectiles at up to 10 kilometers per second (36,000 kilometers per hour, 22,370 miles per hour). The launcher is designed to simulate the damage small space debris particles could inflict upon spacecraft like satellites and future space stations.This clip shows the IDL projectile and collision in action.

According to the European Space Agency's Space Debris Office (SDO), about 31,630 debris objects orbiting the Earth are tracked by various networks. However, these make up part of the estimated 36,500 objects spanning at least 10 centimeters (~4 inches) in diameter and don't account for the estimated 1 million space debris objects measuring 1-10 centimeters or 130 million objects measuring 1 millimeter to 1 centimeter.

The IDL measures 8 millimeters (~0.3 inches) in diameter and can fire 0.36-gram magnesium projectiles to simulate space debris in the 1-millimeter to 1-centimeter range. Though their size is relatively inconsequential, such space debris objects can be accelerated by Earth's rotation up to speeds of about 8 kilometers per second, allowing them to cause significant damage to spacecraft.

"Statistically, the most likely collisions will occur at around 11 km/s. Although orbital velocity in LEO [Low-Earth Orbit] is 8 km/s (because various objects are in different inclinations), the most likely impact would be a side-on collision at 11 km/s. The requirement for testing orbital debris shielding at greater speeds has long been identified as critical, including by studies done by the U.S. National Academy of Science," wrote Andrew Higgins in an email to Universe Today.