Tesla has shown off a new "solar range extender trailer" at the IdeenExpo in Hanover, Germany.

The solar-panel-laden trailer also has a Starlink internet system to connect with the satellites in SpaceX's network. Electric vehicle (EV) manufacturers like Lightyear have produced cars with their own solar panels built in, however, Tesla seems to be taking a different route to extending the range of its vehicles.

The relatively low efficiency of solar technology means such vehicles can't significantly extend their range beyond what the inbuilt battery capacity offers. However, some owners of other EVs have still opted to augment their experience by using separate, portable solar panels for charging their vehicles.

Details on Tesla's solar trailer are still scant, but if each of the nine panels generates 300 watts, the trailer would have a combined output of 2.7 kilowatts. This would mean it could only generate power for up to 50 miles (80.4 kilometers) of additional range in a day, or one-third of that when the panels are retracted. For comparison, the Lightyear 0 electric sedan can produce up to 70 kilometers (44 miles) of extra range with its embedded solar cells. 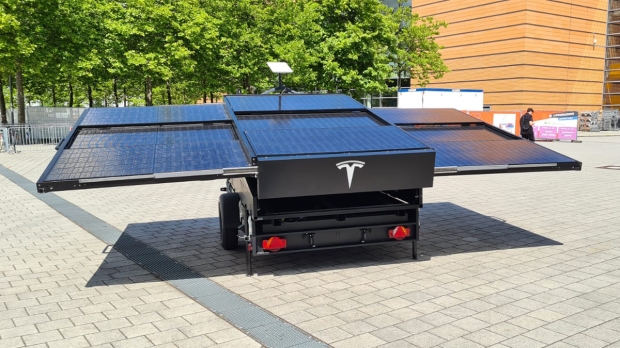