On January 15, 2022, an underwater volcano erupted, that caused a violent explosion that shook the island of Tonga.

The underwater volcano named the Hunga Tonga is a submarine volcano that is located approximately 40 miles north of Tonga's capital, Nuku'alofa. Upon eruption, the massive underwater volcano immediately created a four-foot-tall tsunami that devastated the Tongan islands, wiping out most houses and structures. The Tongan government declared the event an "unprecedented disaster".

The explosion from the volcano was so large that it was detected in space by a NASA satellite. The above video was captured by the GOES West Earth-observing satellite that is operated by the U.S. National Oceanic and Atmospheric Administration (NOAA), and it showcases a large cloud of smoke suddenly erupting. The large plume of smoke reached 36 miles in altitude, and the power of the explosion was estimated to be ten megatons of TNT exploding, or more than 500 times as powerful as the nuclear bomb that was dropped on Hiroshima. 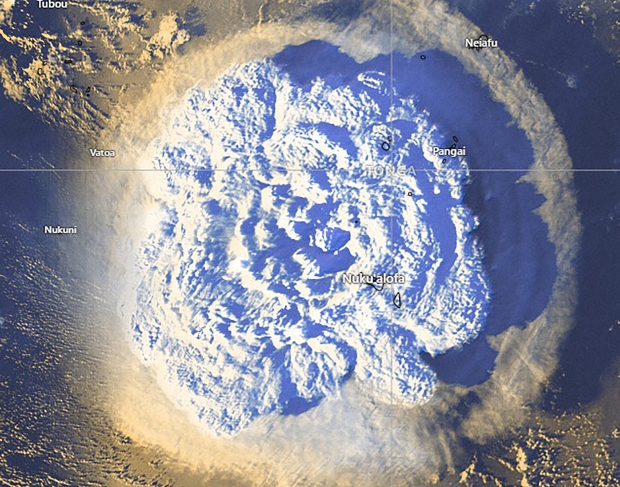 Now, a recent study published in the journal Nature details the speed of the pressure waves that were created from the explosion, and according to the study's lead author Corwin Wright, a Royal Society University Research Fellow based at the Centre for Space, Atmospheric and Oceanic Science at the University of Bath in the U.K., these atmospheric pressure waves reached speeds of 720 miles per hour, which is "very close to the theoretical limit".