Cyberpunk 2077 is one of the biggest, if not the biggest NVIDIA DLSS title... which now has unofficial AMD FSR 2.0 support, thanks to a third-party modder. 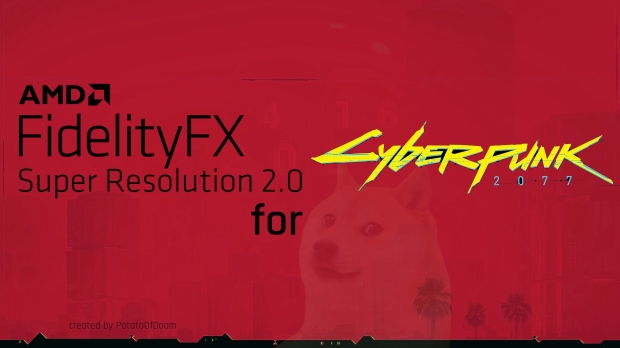 AMD's new FidelityFX Super Resolution 2.0 (FSR 2.0) technology is getting into more and more games, but with modder "PotatoOfDoom1337" replaced the NVIDIA DLSS 2.0 files with FSR 2.0, and it worked. Cyberpunk 2077 has support for FSR 1.0 already, but no official FSR 2.0 support yet.

All you have to do to get FSR 2.0 support into Cyberpunk 2077 is replace some files and make some changes to the registry in Windows, and you get some fantastic performance improvements thanks to FSR 2.0 upscaling tech. The modder used a previous-gen GeForce GTX 1080 graphics card, and ran Cyberpunk 2077 with FSR 2.0 at 4K at 45FPS... double the performance than he had from his GTX 1080, thanks to FSR 2.0.

Now, this is a non-official third-party mod for the game and so there will be issues. The biggest takeaway from this is we could see more games with NVIDIA DLSS 2.0 support, getting an injection of FSR 2.0, and with it, bringing more free performance on a wider range of graphics cards.