A study on the illusion titled "The Eye Pupil Adjusts to Illusorily Expanding Holes" has been published in the journal Frontiers in Human Neuroscience. 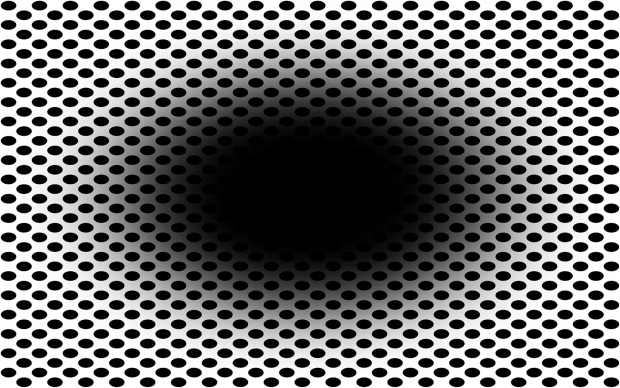 For 86% of people, looking at the central black hole in the above image causes it to appear to expand, as if you were moving into a darker environment. Researchers use illusions such as these in scientific settings to probe how the visual system works. The new "expanding hole" illusion tricks the brain into dilating our pupils to let in more light as if we are really moving into a darker environment and need to let more light into our eyes.

"Here we show based on the new 'expanding hole' illusion that that [sic] the pupil reacts to how we perceive light-even if this 'light' is imaginary like in the illusion-and not just to the amount of light energy that actually enters the eye. The illusion of the expanding hole prompts a corresponding dilation of the pupil, as it would happen if darkness really increased," said Dr. Bruno Laeng, a professor at the Department of Psychology of the University of Oslo.

The researchers also tested different variations of the illusion on participants in their study. They found black to be the most effective color to cause the perception of an illusory expansion, with only 14% not experiencing it. Comparatively, the illusion didn't occur for 20% of participants when using any other color. How strongly participants perceived the illusion also correlated with how much their pupil diameter changed, and for colored variations, pupil constriction occurred instead of dilation.

"Our results show that pupils' dilation or contraction reflex is not a closed-loop mechanism, like a photocell opening a door, impervious to any other information than the actual amount of light stimulating the photoreceptor. Rather, the eye adjusts to perceived and even imagined light, not simply to physical energy. Future studies could reveal other types of physiological or bodily changes that can 'throw light' onto how illusions work," concluded Laeng.

Illusions : The Adventures of a Reluctant Messiah