The French inventor of the jetpack has unfortunately suffered from a horrible crash landing after falling 50 feet during a demonstration.

French inventor Franky Zapata was demonstrating a new jet-powered hoverboard when the demonstration took a turn for the worst as Zapata lost control of the device and began to climb in altitude while spinning uncontrollably. The crash occurred over a Lake Biscarosse, located on the west coast of France, and according to reports from BBC, Zapata is alive and recovering from the fall in hospital.

The event was captured by onlookers and was quickly posted to Twitter, where the video/s gained traction. Above, you can see Zapata flying what seems to be Zapata's company's "Flyboard Air", a device capable of reaching speeds of 87 mph, and, according to the company's website, "this machine can lose one engine and still fly. If it loses two engines, the pilot will perform a controlled landing."

At the time of reporting, Zapata hasn't confirmed if the device he was flying was the Flyboard Air or if it was some other device that the company is working on. 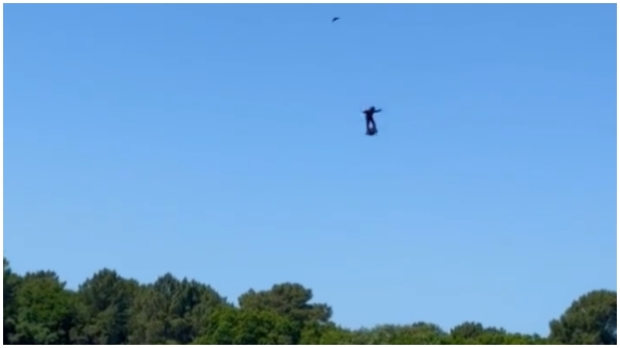