O'Meal took to his TikTok and Instagram account to share an awesome image of ARP271, a pair of similarly sized interacting spiral galaxies more specifically named NGC 5426 and NGC 5427. The two colliding spiral galaxies reside in the constellation Virgo and are located about 130 million light years away from Earth. Notably, the ARP271 pair has a diameter of 130 million light years across, and judging by the comment section of the viral TikTok video, many people have just realized what a light-year actually means.

The TikTok video has, at the time of writing, been liked 1.8 million times and viewed 9.7 million times, with many commenters realizing that the image captured by telescope is of events that happened 130 million years ago. One commenter realized the same principles apply to viewing planets in search of life. If we observe a planet that's 100 million light years away, and see an alien civilization, it means that what we are seeing happened 100 million years ago. 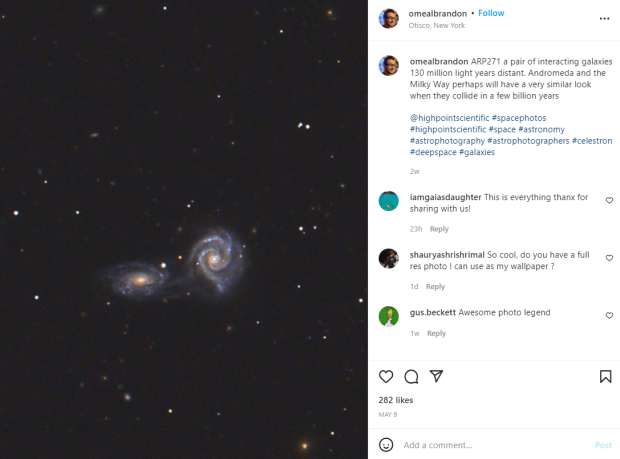 This is a common problem posed to researchers that are searching for life as it would certainly be useful to locate an alien species, but what if 100 million light years away? By the time we can make contact, we don't even know if the species is still alive. Additionally, we have no way of traveling that distance or maintaining human life for even a fraction of the travel time.

After putting all of these things into perspective, it's still extremely difficult to attempt to create a scale model of the universe with your imagination. The distances are just too far to accurately imagine, especially when you are trying to imagine traveling at the speed of light (186,000 miles/sec) for millions of years.