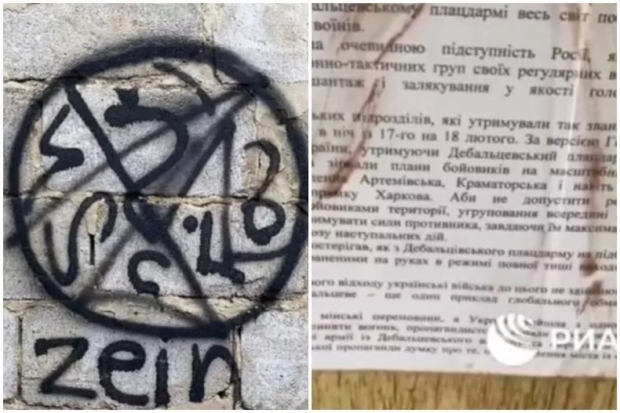 Russian state media outlets have reported that Ukraine's Armed Forces throughout the eastern Donbas region are practicing black magic. Reports from the media outlets feature photographs by the Russian military of "signs" of black magic used inside Ukrainian military headquarters. The outlets described one of the signs as a "satanic seal" that was found on the walls.

Cult researcher Ekaterina Dyce, who was quoted by Russian state media, said, "What it means is difficult to say for sure, in it you can see both the inverted sign of anarchy and part of the sign "CC", rune zig, it is clearly visible in the far left sector of the circle, and the Hebrew letter "zayin" written in German, meaning sword or weapon".

Notably, the cult researcher also said that the symbol is a "magic seal of dark forces" and represents anarchy weapons and fascist symbols. Adding that, it does have an "occult nature". Furthermore, Russian state-owned media outlet Sputnik reported that "traces of black magic rituals" have been discovered by the Russian military in the Donbas region.

RIA Novosti reported that inside one of the Ukrainian military headquarters, a document with found containing information about losses throughout the Donbas region, and on that document was stripes of blood. "There were blood stripes on the document, despite the fact that there were no such traces anywhere else," reported the outlet.