Sun has been on a rampage with activity lately, releasing a succession of solar flares and coronal mass ejections.

On April 20, officials confirmed that in a 24-hour period, an active sunspot group flared 19 times, with six of those flares being M-class (moderate) explosions followed by a very powerful X2.2 (strong) class flare. These flares came from a region just beyond the southwest limb of the Sun, "likely former Region 2992," according to the National Oceanic And Atmospheric Administration (NOAA).

Notably, the large flare of the barrage that was released came from a sunspot located on the edge of the Sun, meaning that Earth didn't experience the full force of the blast. Officials at the US Air Force confirmed that the flare caused a Type II solar radio burst. NOAA reported that it impacted large portions of the sunlit side of the Earth; southeast Asia and Australia. Throughout this time, radio operators would have noticed a loss of connection at frequencies below 30 MHz for about an hour. 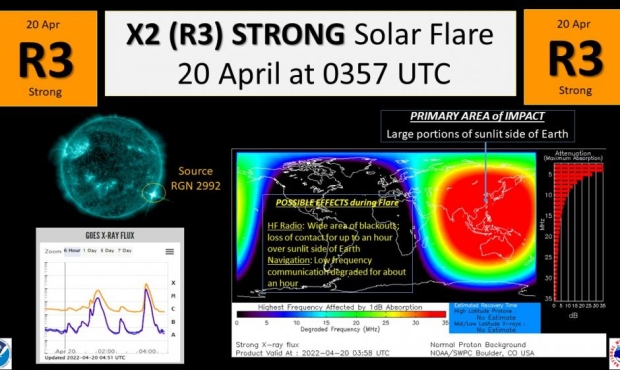