All NewsBusiness, Financial & LegalCases, Cooling & PSUContests & GiveawaysCPU, APU & ChipsetsDealsDisplays & ProjectorsGamingMotherboardsScience, Space & RoboticsStorageVideo CardsVirtual & Augmented Reality
All ReviewsAll ArticlesAudio, Sound & SpeakersCases, Cooling & PSUCPUs, Chipsets & SoCsComputer SystemsDisplays & ProjectorsGamingMotherboardsNetworkingPeripheralsRAMStorageVideo Cards
GuidesGamingAsk the ExpertsNewsletterAboutForums
RTX 3090 TiRTX 4090Diablo 2GTA 6Halo InfiniteElon MuskRTX 3080HDMI 2.1
During our visit to Gigabyte yesterday, we got some very exclusive shots of what is possible the first Nvidia 750i based motherboard to be shown online. The board goes under the name of GA-750SLI-DS4 and this will be Gigabyte's mainstream SLI board, if there is such a thing. It will replace the ageing 650i based product and it offers a fairly decent range of features.

As with the 780i, the 750i is actually still using the older chipset, so under the big heatsink is a 650i chipset, however, if you follow the heatpipe, it leads to Nvidia's N200 chipset, which is the same used on the 780i based boards. This means that you get PCI Express 2.0 support with the 750i, although it is limited to a degree as not to compete with the 780i. 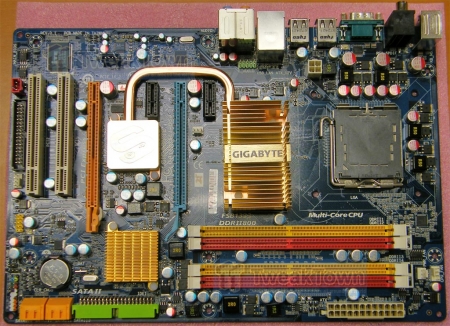 Nvidia has somehow limited the N200 chipset to only allow for a single x16 or dual x8 slots, although we're not certain how this has been done. You can clearly see that the pins are missing inside the yellow slot about halfway down. Gigabyte's design is rather interesting with the N200 chipset between the two x16 slots and it's the first time we've seen such a peculiar motherboard design, although as there hasn't been any three chip chipset solutions for a very long time, this could be the reason why.

The rear I/O is home to two PS/2 ports, optical and coaxial S/PDIF, a serial port, six USB 2.0 ports, a Gigabit Ethernet connector and 7.1-channel analogue audio. The board also has four SATA ports, which might be a bit limiting to some users, an IDE connector and a floppy connector and there's also a header for a further two USB 2.0 ports. In addition to the two x16 PCI Express slots, there are two x1 PCI Express slots and two PCI slots. This board should launch about the same time as the 780i based boards.
Newsletter Subscription