Some of the most pivotal figures in video game history are now embracing new trends like NFTs and blockchain. 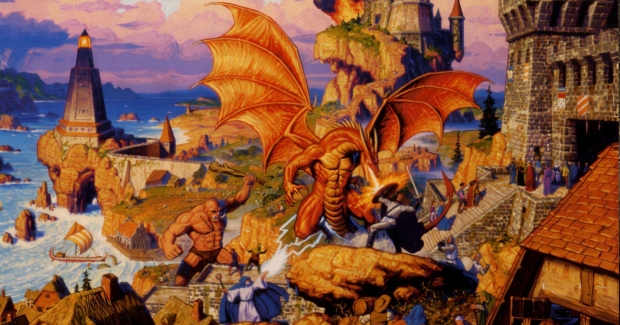 It's happening. NFTs are coming, and some of gaming's founding fathers want to usher in the new blockchain era. In a development that can only be described as old-school meets new-school, Richard Garriott, renowned designer of the legendary Ultimate series, is making a new MMORPG that uses NFTs and blockchain.

Thanks to his efforts with the Ultima series, Richard "Lord British" Garriott is largely regarded as the father of modern video game RPGs. Now he's making a new game alongside longtime collaborator Todd Porter called Effigy, a new MMO game that uses blockchain to store data and manage in-game purchases. Effigy will allow players to "own" dungeons and in-game areas with the basic goal of turning players into investors.

"What if Richard and I could take a whole community along with the journey of actually creating a new game, a new "Ultima"? And what if the people who did this actually really own stuff that they could actually make money on? So they're not just players, they could also be investors and reap some rewards from that," Todd Porter said in a recent interview with PC Gamer.

"We've come up with a system whereby when you put money in you have the opportunity to get money out. We're certainly doing more for players than just, when they put their money down, they play the game and all they're getting out of it is 60 hours of fun," Garriott said.

Following the billion-dollar microtransaction model that has completely transformed the video games industry, NFTs and blockchain are gaming's latest craze. Garriott isn't alone in wanting to help pioneer and shape the new frontier; Facebook believes so strongly in web 3, the new digital internet that will usher in the metaverse and help propagate these trends, that it changed its name to "Meta."

Major industry players like Ubisoft, Square Enix, and Electronic Arts are all interested in NFTs. Ubisoft's first foray into NFTs has been an utter disaster that has done nothing but make gamers angry. Konami also threw its hat into the NFT ring, but didn't tie them with games, instead opting to sell images and digital items based on Castlevania IP.

Play-to-earn blockchain games like Axie Infinity have made billions off of what's described as a cheap labor market, offloading money-making gruntwork to poverty-stricken countries like the Philippines. These games have been largely referred to as "grifts" for good reason, and the get-rich-quick scheme appeal of NFTs has gotten the attention of the entire video games market--whose major companies all have R&D divisions specifically focused on experimental, emerging technologies that could help inflate earnings.