NASA has taken to its blog and to the "NASA Goddard" YouTube channel to explain the difference between solar flares and CMEs. Solar flares and CMEs often occur at the same time but are very different as solar flares are giant bursts of X-rays and energy that travel at the speed of light in all directions. These flares come from the motion of the sun's interior, causing the magnetic field to build tension and then explosively realign, much like a rubber band.

A solar flare can last minutes to hours, and throughout that period, it releases a large amount of charged particles that can reach Earth in eight minutes or less. As for a CME, NASA explains magnetic contortions can also cause plasma from the sun's corona to be shot into space. This plasma is a wave or cloud of magnetized particles that travel at more than a million miles per hour and usually take about three days to reach Earth.

Flares and CMEs have different effects at Earth as well. The energy from a flare can disrupt the area of the atmosphere through which radio waves travel. This can lead to degradation and, at worst, temporary blackouts in navigation and communications signals.

On the other hand, CMEs can funnel particles into near-Earth space. A CME can jostle Earth's magnetic fields creating currents that drive particles down toward Earth's poles. When these react with oxygen and nitrogen, they help create the aurora, also known as the Northern and Southern Lights. Additionally, the magnetic changes can affect a variety of human technologies.

High frequency radio waves can be degraded: Radios transmit static, and GPS coordinates stray by a few yards. The magnetic oscillations can also create electrical currents in utility grids on Earth that can overload electrical systems when power companies are not prepared, wrote NASA. 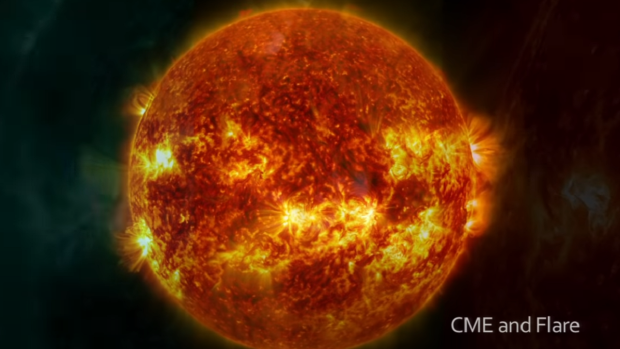