NASA's database that tracks all of the detected space rocks that could pose a threat to Earth indicates that an asteroid with an estimated diameter of about a mile is due to approach Earth soon. 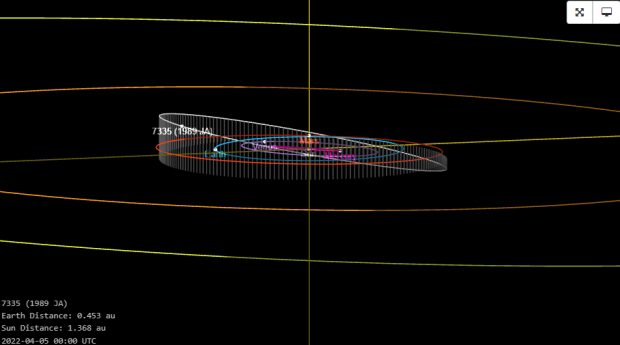 NASA's Center for Near-Earth Studies (CNEOS) database lists the asteroid called 7335 (1989 JA), and states that its estimated diameter based on past measurements is 1.8 kilometers or 1.1 miles. The asteroid was first observed in 1989 by Helin, E. F. at Palomar and was last observed on March 26, 2022. 1989 JA will be the largest asteroid to approach Earth in 2022, and NASA expects that it will safely fly past our planet at a distance of 2.5 million from Earth or 0.02690 astronomical units.

Before 1989 JA arrives near Earth, another large asteroid called 2008 AG33 will approach Earth on April 28, and that asteroid is estimated to be anywhere between 1,083 feet and 2,428 feet in diameter. 2008 AG33 will be traveling at around 23,200 miles per hour when it flies safely past Earth at a distance of around two million miles.