America's "doomsday plane" isn't the only one able to take to the skies in the event of nuclear war. 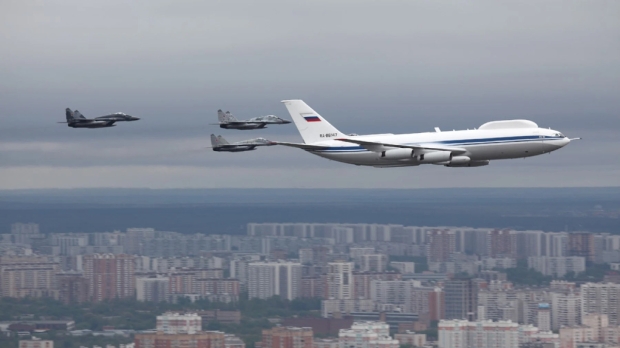 Both the U.S. and Russia can keep their heads of state and important military officials safe and capable of issuing commands in case of nuclear war with their respective "doomsday planes." The U.S. has a modified Boeing 747, a Boeing E-4B with the callsign Nightwatch, while Russia has the Russian-made Ilyushin II-80 aircraft. Also known by the callsign Maxdome, or sometimes Camber, the Ilyushin II-80 builds off the Ilyushin II-86 model with some key differences.

Some differences include the lack of cabin windows and a baffle blocking the cockpit windows to protect the plane's occupants from electromagnetic pulses (EMPs) or nuclear explosions. Other additions include various SATCOM and very-low frequency (VLF) antennae and sensors mounted atop the fuselage for increased communication ability and has two large electrical generator pods to accompany its engines.

Nightwatch was developed a decade before Maxdome took flight for the first time and retains its cabin windows, protecting itself from EMPs with shielding and the inclusion of analog equipment. Both the American and Russian doomsday plane fleets have seen their first generations built and retired, with their second generations having four planes in active service. Russia is reportedly developing a third-generation aircraft to take up the mantle.